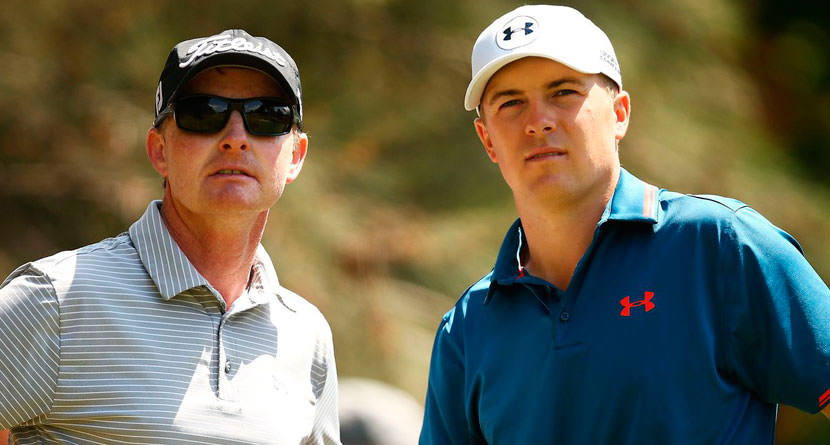 For the first time in his professional career, Jordan Spieth is without trusted caddie Michael Greller at an event this week at the Australian Open.

Defending his title Down Under, Spieth enlisted the help of another member of his inner circle while Greller spends the Thanksgiving holiday back home with his wife and their newborn child.

“Cam is more, ‘just shut up and hit it. Quit taking so long’. He’s more reaction.” Jordan Spieth on his instructor, Cameron McCormick, filling in for regular caddie Michael Greller this week.

GolfChannel.com’s Will Gray revealed who would be toting Spieth’s clubs around The Australian Golf Club outside of Sydney this week.

Spieth and Michael Greller have combined to win 14 tournaments and three majors, including three events in 2017. But Greller’s wife, Ellie, gave birth to the couple’s first child on Oct. 13, and according to a report from the Australian Herald Sun, he will not make the intercontinental trip to Sydney, where Spieth will look to win for the third time in the last four years.

Instead, Spieth will have longtime swing coach and native Aussie Cameron McCormick on the bag at The Australian Golf Club. McCormick, who won PGA Teacher of the Year in 2015, is originally from Melbourne but now lives in Texas and has taught Spieth since he was a rising star among the junior golf ranks in Dallas.

While Greller has missed rounds before, this will be the first time as a pro that Spieth has used a different caddie for an entire event. Greller was sidelined with an injury last year in Singapore when Spieth’s agent, Jay Danzi, took the bag, and trainer Damon Goddard has subbed in twice when Greller was sick, including this year at the Dean & DeLuca Invitational.

Spieth has shot rounds of 70 and 71 to enter the weekend at 1-under par. He’ll have some ground to make up as he currently sits eight shots back of Jason Day and nine shots back of 36-hole leader Lucas Herbert.