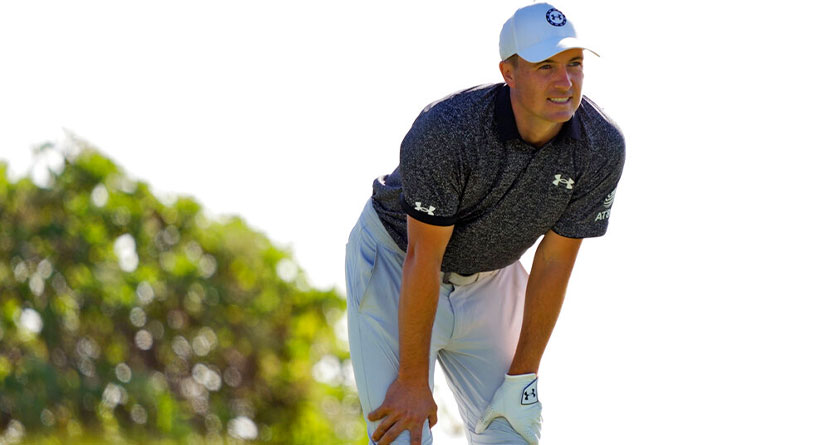 HONOLULU (AP) — Jordan Spieth played about the way he expected Thursday, another sign of growing confidence in his game, as he opened with a 6-under 64 and a share of the lead at the Sony Open with Chris Kirk and Taylor Montgomery.

Harris English had a 65 on a gorgeous day at Waialae Country Club, with a blazing sun and just enough wind to make players think every now and then. The large group one behind also included Olympic silver medalist Rory Sabbatini of Slovakia.

S.H. Kim of South Korea was 5 under with two holes to play when the opening round was halted by darkness.


Spieth ended nearly four years without a victory when he won the Texas Open in 2021, and then added another win at Hilton Head last year. Missing on this day was the slow swing rehearsal to ingrain the changes he made to his swing.

His key word is freedom, and it sure looked that way at Waialae. He had three birdies in a a four-hole stretch around the turn, and outside of his lone bogey on 13th hole, his only disappointment was having to settle for par on his final hole at the par-5 ninth.

Tied at the top ⬆️@JordanSpieth holds a share of the lead after his round on Thursday. pic.twitter.com/aRFjtRAiMd

Defending champion Hideki Matsuyama opened with a 68, one better than Adam Scott.

If there was a shot that stood out to Spieth, it was his drive on the 426-yard 12th hole that rolled along the dry turf and finished 83 yards away. It wasn’t so much the distance, that left him a lob wedge to 12 feet for birdie, but the swing.

“I call it ‘in front of fade,’ meaning just my sequence was fantastic. It was on plane. It was just exactly what I’ve been working toward,” Spieth said. “And I just hit this 5-yard fade that held the wind up the middle of the fairway.

“When I hit that shot I walked off saying, ‘This could be a really good day if I keep pressing how that just felt,’” he said.

And it turned out to be just that.

Waialae holds happy memories for Kirk. Two years ago, after stepping away to deal with alcoholism and depression, he had one last start on a medical extension to keep his card and shot 65 on the last day to tie for second, regaining full playing privileges.

Now he’s in a good spot, and he made birdies against two bogeys.

Kirk, like the majority of the first full-field tournament of the year, has not played in seven weeks since the RSM Classic at Sea Island. But he worked plenty hard in the offseason, especially on his fitness, and he has hit the ground running.

Kirk’s hard work included some fun times. He hired a new trainer, Jake Crane, who has a baseball background and Kirk said he would pitch or take swings from a pitching swing during some of the downtime.

There isn’t much of a chance for a career change. His fastball tops out at about 65 mph, though he is proud of his breaking pitch. But mostly, it’s about his condition.

“I always kind of show up to this tournament feeling good and fit,” Kirk said. “That’s my No. 1 goal this year, is to try to maintain it and work harder in the gym when I’m home in the off weeks.”

As for Montgomery, his biggest concern was the seven-week break from the fall schedule, which he played well. The Las Vegas rookie finished in the top 15 at six of his seven tournaments and didn’t seem to miss a beat.

Most concerning was the 10 days he spent without a golf club in hand while seeing family in Colorado and Nevada, which Montgomery says was his longest break ever.

But his putting never left him, and he gets a fresh start Friday morning.

Michael Castillo, the Kapalua club pro who qualified for his first PGA Tour event at age 60 while battling cancer, opened with a 79.