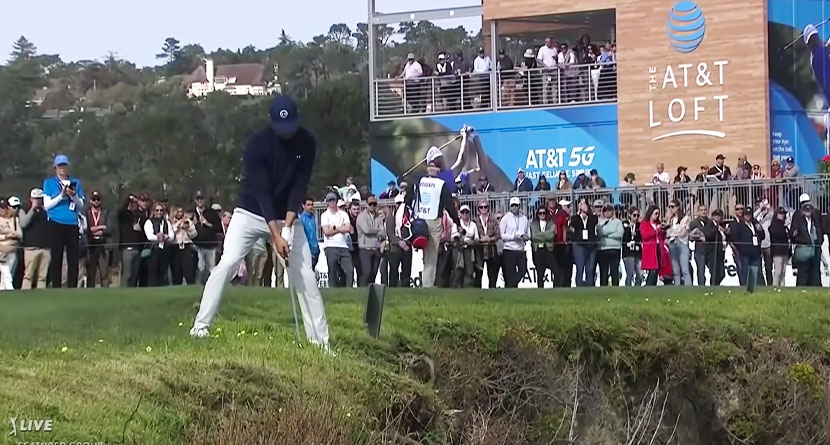 A massive part of the allure of Jordan Spieth is that the 28-year-old Texan always seems to make you feel something when you watch him play.

On Saturday during the third round of the AT&T Pebble Beach Pro-Am, that feeling was abject terror as he played his second shot into the par-4 8th hole literal inches from the edge of a 70-foot cliff.

What was Jordan Spieth thinking hitting that shot?

As he would say after the round, Spieth wasn’t thinking.

“Michael hated it. He tried to talk me out of it three times. I don’t blame him, looking back. I’m just glad I made the par to make it worth it,” Spieth said. “If I felt like I was in real true danger of losing my life I would have pulled the ball back and dropped it. It wasn’t quite that severe. But it was enough to where I certainly couldn’t put a normal swing or shot on it.”

The par was textbook Spieth, getting up-and-down from long and left of the putting surface — generally regarded as next to impossible — thanks to a 12-foot putt that slid in the side door.

The unnerving par kept a solid round going as he had reached 4-under par through 7 holes. He would go on to birdie the 9th and 11th before dropping a shot at the par-4 13th, but birdies on four of his last five holes put Spieth one shot back of the lead heading into Sunday.

Sunday offered no such histrionics from Spieth, who took the lead late on the front nine, but failed to close it out down the stretch as Tom Hoge shot a 4-under par back nine to win by two. The solo second-place finish was Spieth’s best on Tour since he was runner-up to Collin Morikawa at The Open Championship last year.