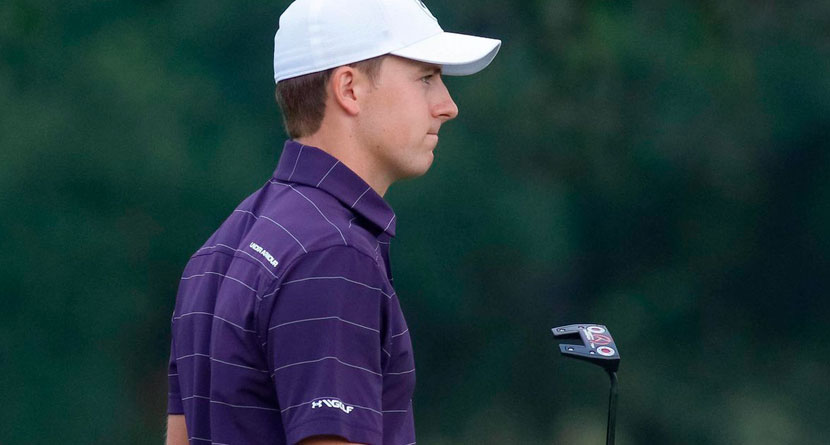 When you think of Jordan Spieth, very few things spring to mind before thinking of his ability on the greens and his trusty, rusty Scotty Cameron 009 putter. This week at the AT&T Byron Nelson, Spieth’s old faithful isn’t in the bag.

Struggling to find a consistent line, Spieth opted to put a Scotty Cameron T5W Tour mallet in play. This marks only the third time since he turned pro in 2012 that he’s used any putter other than his 009, according to PGATour.com’s Jonathan Wall.

Jordan Spieth using the @ScottyCameron T5W Tour Only putter this week at the @attbyronnelson. pic.twitter.com/Xw45rEi9QH

Here’s more on the switch from Wall.

Following a missed cut at THE PLAYERS Championship, Spieth expressed mild frustration with his putting, particularly his alignment on Bermuda greens. While the greens at TPC Four Seasons Las Colinas are Bentgrass, Spieth still made the change at his hometown event.

“It’s just been on and around the greens I just haven’t quite figured it out,” Spieth said last week. “These greens get pretty crusty and, historically, whenever firm Bermuda or greens are crusty to where it’s tough to set the putter down, I just struggle with my alignment and it just kind of throws me off. It happened again here.”

Over the last two years, Spieth has ranked second and ninth respectively in Strokes Gained: Putting; through 11 starts this season, he sits 39th in the statistical category (plus .399).

Spieth’s track record with the 009 is well known. The trusty blade has been in the 23-year-old’s bag since his days playing junior golf, and has played a part in all 12 of his worldwide wins. Prior to this week, the two previous instances Spieth switched putters (2014 Open Championship and 2015 BMW Championship), he returned to the 009 in his next start.

Of course, since this is Jordan Spieth, much is being made of the switch, which doesn’t sit well with the Texan.

Spieth shot a first-round 2-under par 68 to put him four shots back of the leaders.