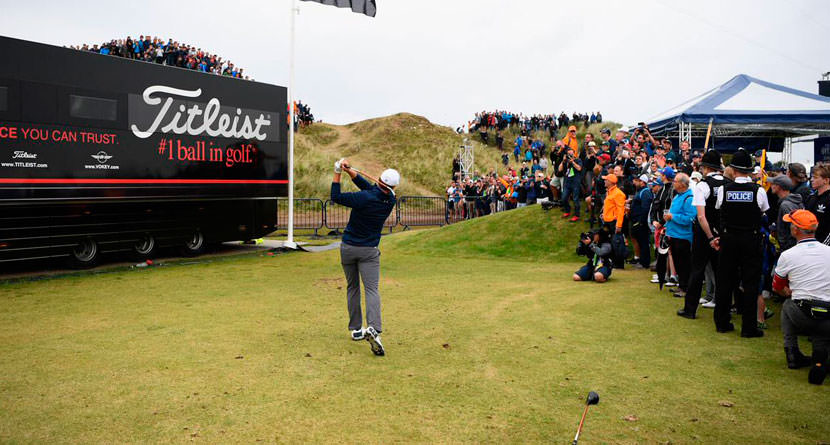 Jordan Spieth’s win at Royal Birkdale this summer was one for the ages. Naturally, the host club wants to commemorate that fateful week in July and Jordan Spieth came through with an incredible memento.

Special delivery to the club today.No ordinary 3 Iron (No visible ill effects of playing from the range!)Many Thanks @JordanSpieth #TheOpen pic.twitter.com/3QAvWCWu4J

The club, which Spieth used from Birkdale’s driving range on Sunday on the 13th hole was the impetus for his mad dash to the finish line that saw him play the final six holes in 4-under par (including a bogey) to beat Matt Kuchar by three strokes.

It’s not often a golf club used during a famous a bogey is encased in glass, but Jordan Spieth’s bogey 5 on the 13th hole during the final round of the British Open was far from ordinary.

Royal Birkdale tweeted on Wednesday that it received a “special delivery to the club” — Spieth’s three-iron.

Remember why it’s so well-known? Rewind to British Open Sunday at Birkdale, where Spieth and Matt Kuchar, playing in the final pairing, stepped to the 13th tee tied at eight under. That’s when Spieth hit his worst drive of the week, which came to rest well right of the fairway and on the wrong side of a massive dune. Spieth took an unplayable lie and was allowed to go back as far as he liked on the same line—and he ended up on the driving range, roughly 70 yards farther back from where his ball came to rest. After what seemed like an eternity, Spieth finally hit his approach. He missed the green, chipped on and one-putted for an eventful bogey. He fell one shot behind Kuchar, who parred.

But you know the story from there. Spieth birdied the next hole to re-tie Kuchar for the lead, surged ahead with an eagle on 15 and slammed the door with birdies on 16 and 17 to win the Open by three. That three-iron will now forever reside at Royal Birkdale.