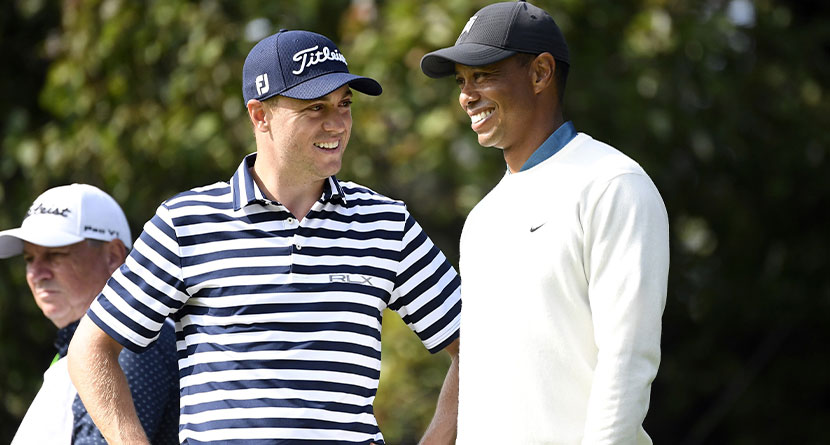 All Tiger Woods-related news and updates since May — when he gave an interview to his content partners at Golf Digest — has been mostly heresay and speculation, however golf fans got an encouraging update from someone close to Tiger via a recent podcast.

Justin Thomas, who lives near Woods in South Florida and has befriended the 15-time major champion in recent years, joined the No Laying Up Podcast this week to recap his year on the course, and naturally, the topic of Woods came up.

Thomas said he’s been spending a good amount of time with Woods when he’s at home in Jupiter, bringing his dog over to run around with Woods’ pups and to check in on his friend.

“I’d say I probably go over and see him two or three times a week when I’m home,” Thomas said. “I go over there more so to let our dogs play and hang out — it wears our pup out. But yeah, he’s doing well, especially all things considered.

“I mean, it’s Groundhog Day. Every day’s the exact same thing for him. But at least he’s able to — pictures were going around of him at Charlie’s tournament, Sam’s soccer tournaments here and there. He’s able to be a dad somewhat again, which is most important.

“He’s still his sarcastic a—— self so nothing has changed there, so I’m glad to see that he’s still chipper as always.”

As for what’s coming for Woods, Thomas was careful to not make any promises.

“I don’t know, I mean, I know that he’s going to try (to play competitively again),” Thomas said. “I don’t see him ever playing if he can’t play well. He doesn’t strike me as a guy who’s played at home and he’s shooting a bunch of 75s and 76s and he’s like ‘Okay, I’m gonna give Augusta a try this year.’ That’s not really gonna be him, at least from my understanding, what I know of him.

“He knows that there’s a pretty good chance that (the 2019 Masters) was the last chance he really ever had, before that, of making another run, but at the same time I know how determined he is and I know he’s going to want to at least try to give something again.

“Obviously I hope he does. But at the same time, as I said after the accident, as long as he can be a dad and be normal with that again, that’s the number one priority, and the rest of this is a bonus.”

Thomas stuck to his guns as it pertained to Woods’ top priority being a good father, but warned that his competitive nature will make it difficult for Woods to simply call it a career.

“Even if it’s something like when he feels good again if he goes and rides around with Charlie at the Father-Son,” Thomas said. “It’s just something where he wants to be a dad and enjoy those moments with him and watch him potentially be playing.

“And to go watch Sam at her soccer tournaments and she’s such an athlete and how smart she is, to be a part of her life. That’s what he wants to do and his competitive side is not gonna let him just hang it up without at least giving it a try at some point, I’m sure.”

–@JustinThomas34 on the success of the Ryder Cup team, the effectiveness of the US captains, 2021 struggles, recent Tiger visits, rumors of rival golf leagues, mental health, and a ton more.

While the short Tiger segment stole some headlines, the entire conversation with Thomas was interesting, as always. You can listen to the full podcast here.

Only a few days later, Tiger gave his first official health “update” since May on Sunday morning, posting a single swing video to social media with the caption, “Making progress.”

The three-second video appears to be shot at Medalist Golf Club’s range, not far from Woods’ home in Jupiter, Florida. The solitary shot appears to be one of many based upon the divot pattern and bucket of balls next to Woods.

Woods is expected to make his first public appearance in two weeks at the Hero World Challenge, the exhibition in the Bahamas that benefits his foundation and begins Dec. 2.