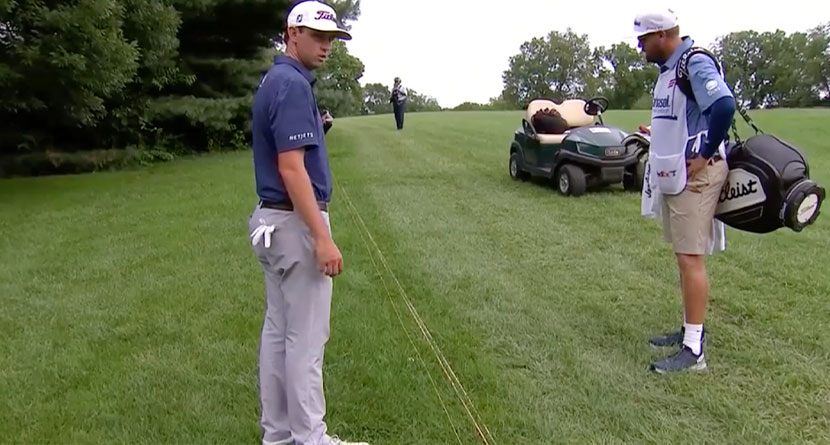 We often hear that golf — and other professional sports — is a game of inches.

Those inches, as Al Pacino says in his Any Given Sunday speech, are everywhere around us. Perhaps given golf’s small hole and even smaller ball, those inches are magnified more so than any other sport and no one knows how valuable an inch can be more than J.T. Poston.

A winner on the PGA Tour, Poston looked to have his second victory wrapped up on Sunday at the Barbasol Championship at Keene Trace in Lexington. Leading by four strokes with four holes to play, Poston needed to steer his ship to harbor in a couple over par to earn the trophy.

Instead, one of those all-important inches came up to bite him on the 15th hole.

Poston’s drive on the 516-yard par-5 went well left of the fairway bringing out of bounds into play. When he reached his ball some 260 yards off the tee, the margin of whether or not it was in bounds was razor-thin.

Golf is a game of inches.

Leader J.T. Poston’s drive at the 15th hole lands out of bounds by the smallest of margins.

He leads by 1 after making a double bogey on the hole. pic.twitter.com/DLwuF2es5b

“I mean, that’s a hole where if you just get it in the fairway, almost everybody’s making birdie,” Poston said afterward of the 15th. “It’s a little bit of an awkward tee shot having to hit kind of a high fade. I like to draw the ball a little bit, so it’s definitely an uncomfortable one for me, but I just put an awful swing on it. I double-crossed it and it was out of bounds by half an inch or an inch or so.”

Poston would go on to make double bogey, cutting his lead in half.

He would go on to make bogey on the following hole, the par-3 16th hole by virtue of a three-putt from 35 feet, which coincided with Seamus Power playing the final three holes in 2-under par to post 21-under.

Poston failed to convert birdie putts of 26 and 21 feet on the final two holes, leading to a sudden-death playoff that again came to a close with Poston making a mistake off the tee. His tee shot on the sixth playoff hole found the penalty area and a drop and missed par attempt later let Power two-putt for the win.

Have worked my butt off all year trying to put myself in a position to win. Golf is a game of inches and sometimes it doesn’t go your way. Better believe I’ll learn from this and be better for it! Congrats @Power4Seamus on the W!! Well deserved!

“I have worked my butt off all year trying to put myself in a position to win. Golf is a game of inches and sometimes it doesn’t go your way,” Poston wrote on social media after the tournament. “Better believe I’ll learn from this and be better for it! Congrats (to Power) on the W!! Well deserved!”