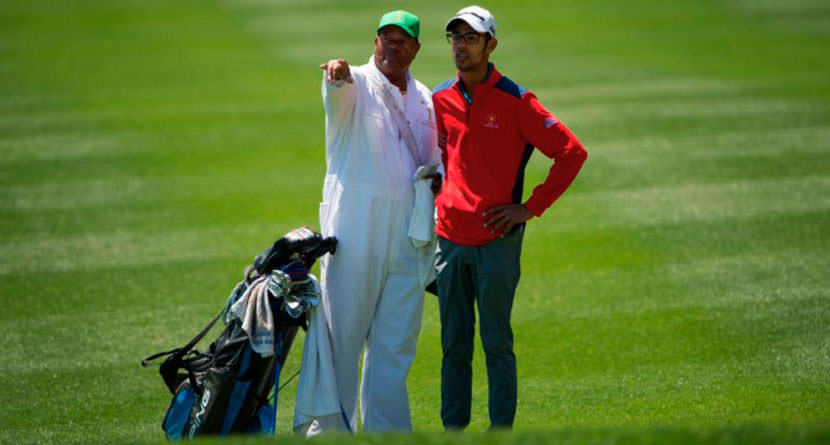 The Sage Valley Junior Invitational is one of the most prestigious junior golf events in the world. Played only 20 minutes from the gates of Augusta National Golf Club, the tournament mirrors the magnitude of the male professional circuit’s first major championship.

Like at Augusta National, there are some slightly different local rules in play at Sage Valley, and one nearly cost Akshay Bhatia dearly.

Beginning the event with two birdies in his first three holes, Bhatia pulled out his rangefinder to see how far he was for his third shot on the par-5 fourth hole. He found out he was 40 yards away before the consequences of his action dawned on him.

At the SVJI, rangefinders are not permitted as they are at most tournaments. Bhatia knew as soon as he got his number that something was wrong. His playing partner asked him if he had used the device, according to Golfweek, and Bhatia called the penalty on himself.

“I knew I couldn’t use a rangefinder, but I decided to take it out for some reason and use it,” Bhatia said. “It’s my fault. I should’ve taken it out of the golf bag (before the round). It sucks, but I’m grateful I’m still in this position and not disqualified.”

The penalty resulted in a double-bogey 7, but the hiccup didn’t derail his round or his tournament. He would go on to shoot 4-under par 68 on the round, putting him in position to win the event, which is exactly what he did.

Bhatia shot a second-round, 2-under par 70 to hold a four-stroke lead heading into Saturday’s final round. A day filled with tough conditions and nerves resulted in a 4-over par 76, which was enough to capture the gold jacket by one stroke.

“I told myself all day that I’m still in control of this golf tournament no matter how many bogeys I made,” Bhatia said. “That’s how you have to think about this. Any time you’re leading like this on this big of a stage, it’s hard to keep it going. I’m definitely proud of myself.

“The two birdies I made (on 13 and 14) calmed me down. I knew I could make a couple mistakes coming in and still win this tournament. I’m just really excited. This is up there. This is such a big accomplishment.”