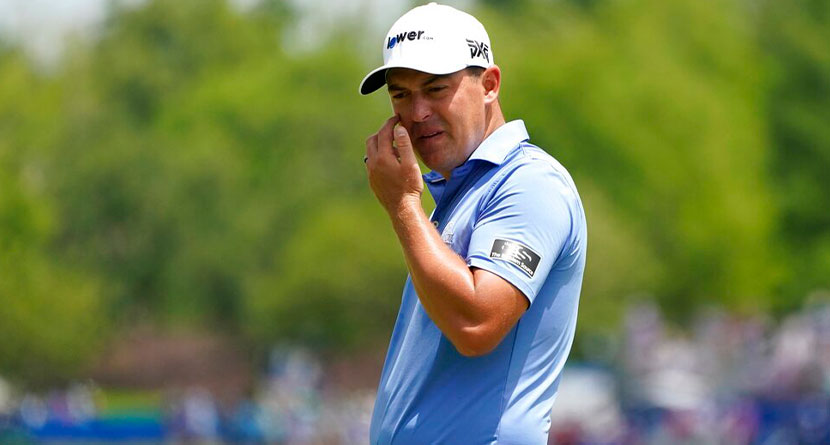 Sports can be filled with some of the best memories a person can have. However, for all the great moments, there can also be immense heartbreak.

Unfortunately for Austin Smotherman and Justin Lower, the end of the Wyndham Championship was the latter.

Smotherman and Lower finished outside of the top 125 in the FedEx Cup points standings after it was all said and done at Sedgefield Country Club, losing their respective tour cards.

After coming into the week as No. 128, Lower looked all set to make the top 125 on the number after getting his score to 8-under par on Sunday afternoon, but instead of finishing it up, he three-putted from 61 feet on the 72nd hole to fall out of the top 125.

Rickie Fowler instead finished in that spot.

“I don’t really know what I’m thinking. It sucks to come up this short, really,” Lower said after his round. “I mean, to get the last card last fall and only have three starts in the fall, to be in this position I guess is, I don’t know, it’s cool … I don’t know, there’s positives, but right now it just flat-out sucks.”

A bogey on the 72nd hole moves Justin Lower outside the top 125 in the projected #FedExCup standings. pic.twitter.com/QHjBojJRFy

“I didn’t know on 18, but I had a feeling,” Lower said about where he stood in the standings. “I just, that first putt I had was, it was like not the putt you want at all, like I don’t even know how long it was. I was trying to hit it 50 feet up the hill and try to use the hill to kind of kill it and it died over the edge. Just hit it a little too hard, because the last thing I want to do is leave it short and have it come back even more.”

For Smotherman, it was a bit more unconventional what happened to him. He entered the week as the bubble boy, sitting at No. 125. For him, a made cut and a decent weekend would put him in the FedEx Cup Playoffs, securing his card for next season.

However, mother nature played a key factor in his round. Smotherman started off exactly how he needed to, carding an opening-round 65 and to be tied for fifth.

He’s projected to miss the #FedExCup Playoffs (ranked No. 125 entering the week) after going par-double bogey on his final two holes after the restart to miss the cut @WyndhamChamp. pic.twitter.com/ZMIfxE2AYE

He missed the birdie putt on 17 to start the morning, but only needed a par on 18 to make the cut, which would end up being 1-under par.

However, he put his second shot into a bad position and made double bogey, missing the cut and falling outside of the top 125 in the points list.