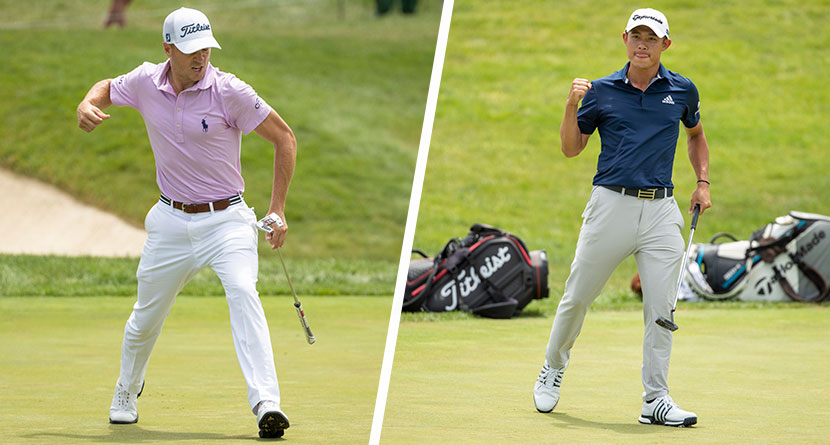 The whole thing started innocuously: Collin Morikawa had fought back from three strokes down with three holes to play in the inaugural Workday Charity Open at Muirfield Village against the No. 3-ranked player, Justin Thomas, and faced a 2-foot putt to force a playoff.

Long touted as the 23-year-old’s bugaboo, Morikawa delivered a shaky stroke that caught the left side of the hole and took a victory lap before falling into the cup. Exasperated, Morikawa took his head in his hands almost as if he had missed it. Little did he know what was about to transpire on that same green about 15 minutes later.

Morikawa and Thomas found themselves as the only competitors on the course at 2 p.m. on Sunday, an anomaly forced due to the threat of storms approaching the Dublin, Ohio area later in the afternoon.

In a sudden-death playoff situation, the pair of 20-somethings retuned the 18th tee and dueled it out for a new trophy. Neither Thomas nor Morikawa hit particularly great drives on the dogleg right par-4, which ranked as the hardest finishing hole on the PGA Tour last season, but both managed to find the putting surface.

Morikawa held an advantage statistically after two shots with less than half of distance to cover with his putt, but Thomas somehow read the 50’4″-foot putt to perfection.

Thomas let out a massive “COME ON!” that, without fans in attendance, had to have reverberated throughout Dublin.

“I mean, there wasn’t really a specific read. I probably played it 30 feet out, something like that,” Thomas said. “It just was more about feeling and getting engaged for the speed because that’s a putt that in all reality I’m just trying to get it around the hole and hope (Morikawa) misses and then try to salvage a par to go on to the next hole.

“Somehow the hole got in the way.”

“I figured I just had to make it,” Morikawa said of his answer. “Obviously, I wanted to put in really good speed, but it didn’t really change much, other than if I missed, we’re done. It’s all over.”

On a day and a back nine in which it seemed the tournament was Thomas’ to lose, Morikawa kept doing enough to stay alive. Swapping a pair of pars on the second playoff hole, the duo headed to the 10th tee for their third sudden-death playoff hole.

Thomas, holding the honor from the tee selection prior to the start of the playoff, missed right of the 10th fairway and found his ball snuggled up close behind a small tree. Morikawa hit both the fairway and the green, forcing Thomas to hole a must-make 18-footer.

When he missed, Morikawa cozied his 10-foot birdie putt down to a few inches and tapped in for the win.

The sweet taste of victory. 🏆

A win at Jack’s Place gets @Collin_Morikawa a trophy and a milkshake. pic.twitter.com/BKmGoGFOAk

“I’m excited. I’m happy,” Morikawa said after the round. “Those three holes were a grind. Obviously Justin making that birdie putt on that first playoff hole, I had to make it, or else we go home again. I just got a little more comfortable throughout the playoff, and I think it just took me a little time. Two playoffs now, and finally got one done.”

For Morikawa, it’s his second victory in his first 24 PGA Tour starts as a pro against just one missed cut over the same stretch.

“I’m not surprised, but I didn’t expect myself to do all this,” Morikawa said of his successful start to his career. “I just set goals for myself, and I had these things that I wanted to accomplish.”

.@collin_morikawa now has 2 wins and just 1 missed cut on the PGA Tour since turning pro.

He’s the first player since @TigerWoods in 1996 to win twice on Tour before missing 2 cuts as a professional.

Tiger won 43 times before his 2nd missed cut as a pro.

Morikawa is back next week at the same venue for The Memorial Tour, which features a bulked-up field that includes Thomas, Tiger Woods and Rory McIlroy among those who were also in the field this week.

“I know Jack is just going to trick this course up a lot more. Obviously, off the tee it’s going to fit very much the same, hitting the same clubs, which I think is going to be beneficial because I see really good lines off these tees. But who knows how much the rough is going to grow in the next three days. Greens can get baked out. I think yesterday with some wind, you started seeing some front pins a lot tougher than you would see even today. Today we had no wind.

“So we got pretty lucky for this first week, but we’ll see what happens next week.”