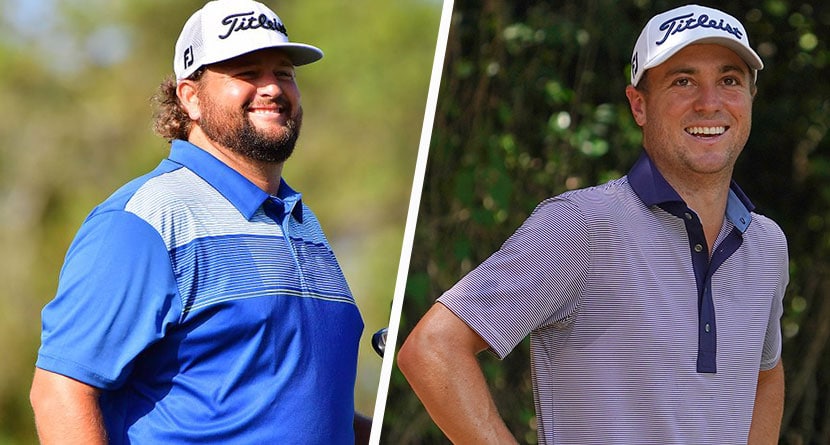 For Justin Thomas, one of the top golfers in the world, his T40 at the Charles Schwab Challenge will likely be remembered in the annals of history as little more than an event played and a cut made, but for his Tuesday practice round partner, it could be the week his life changed.

The 27-year-old pro made a 20-foot birdie putt on the second playoff hole to earn his first start on the PGA Tour at the Valspar Monday Q, and a PGA Tour Entertainment videographer was on hand to catch his immediate reaction as well as his call to his father a few minutes later.

Michael Visacki fights back tears as he tells his father that he’s reached a lifelong goal of competing on the PGA TOUR.

Visacki would miss the cut at Valspar, but his viral moment earned him a cadre of new fans and garnered him a sponsor exemption into last week’s Charles Schwab Challenge.

That’s where Thomas came into the fold.

“(Thomas) messaged me last week and he said, ‘Hey, bud, do you want to come have a practice round on Tuesday,'” Visacki said last week. “I was like, ‘Double yes, please.’ I’ve been here since Friday so I’ve gotten to see the course a couple times. It’s going to be truly amazing teeing it up with J.T. and whoever wants to join us.”

After the practice round, Thomas did something that blew Visacki and his father away: he gave “Big Mike” a personal check for an undisclosed amount of money to help him with expenses as he continued to chase his dream.

“You’re chasing and doing everything you can, I wanted to give you a little something from me,” Thomas said, handing over the check. “I want to support what you’re doing… Keep going, man. I’m looking forward to playing some more with you.”

“I’m not going to say (how big the check was), but it was so much that my legs almost gave out. I almost fell over,” the elder Visacki said. “What he did for my son I will never forget. I will take it to my grave.”

Prior to the Valspar, Visacki detailed the financial obstacles he and countless other mini-tour players face as they chase playing on the Korn Ferry and PGA Tours.

“It’s extremely hard,” Visacki said. “Sometimes entry fees are $400-$600, and if you don’t win or come second, I mean you barely break even. Then it’s not like every week is a free entry fee that we’re just playing for a prize. Like if you miss two or three cuts and each cut, each tournament costs you $500 then in two, three weeks you’re down $1,500 just in entry fee, not alone practicing, having to worry about paying rent, phone bill, electricity, gas, hopefully the car’s not going to break down.

“Even with all my success, it’s still very, very, very hard to make a living. If I was having to pay rent I would probably still wouldn’t be able to play professional golf as much as I’ve won in the past.”

On Wednesday at the Memorial, Thomas spoke about the gesture.

“In a day and age where it seems like anything in the media is negative and not good these days, I just felt it was so refreshing and great to see and how genuine his excitement and emotions were,” Thomas said. “I just thought it was awesome because he’s been playing the mini-tours for a long time and people now knew who he was because of his story.

“For some reason it hit home to me and it just was like, man, you know, this is a dude who’s been grinding for a long time and there’s a lot of people, not just him, that are doing that, but I just wanted to help in a little way and what I’m most happy about is the recognition he has got.”

“I felt joy out of seeing his joy.”@JustinThomas34 met @VisackiGolfer and felt inspired to give back. pic.twitter.com/vjG2em67Tz

“I just wanted to help. I don’t care if it’s a $1,000. That’s extremely helpful for someone who is in that position and that’s what I wanted to do,” Thomas said. “I wanted to be just, like, hey, man, I know Q-School’s expensive, I know playing in these events are expensive, and like any little way I can help out, I want to.”

Thomas said his help wouldn’t end with the check. He wants to be a sounding board for Visacki.

“I just was like, ‘Hey, dude, if you ever want advice, if you ever want to pick my brain, you ever just want to talk, like, I’m here for you. I’m happy to help,’” Thomas said. “I felt joy out of seeing his joy and it just kind of totally made me forget about what’s going on in my golfing life. We’re all out here to try to win a lot of golf tournaments but changing people’s lives and helping people who are less fortunate than you are is more important than that.”

Now, with Thomas’ help, Visacki will be able to chase it a little longer or hopefully, with fewer headaches.