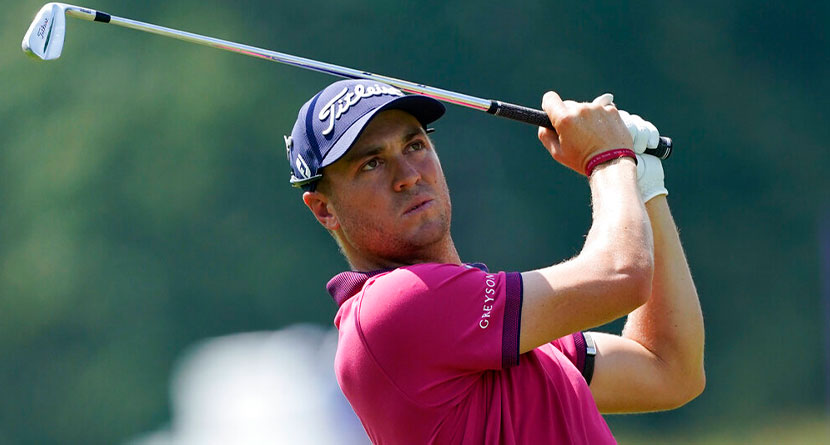 RIDGELAND, S.C. (AP) — Aside from hoisting the Wanamaker Trophy at Southern Hills, perhaps the coolest memory of the year for PGA champion Justin Thomas can be described by the strictest standard as a failure.

No shame there. On the mound was Max Scherzer of the New York Mets.

“I told my buddies whenever he pitched this year and had a great outing, ‘Dude, I totally understand where they’re coming from. He’s a hard guy to hit,’” Thomas said with a laugh.

He still has the video — a very short video — on his phone. The mystery is why Thomas hasn’t posted it to any of his social media accounts. He takes two athletic cuts on a fastball, and then Scherzer threw a breaking ball that had him lunging.

This came about through his relationship with Paul Goldschmidt of the St. Louis Cardinals (both work with trainer Kolby Tullier) and Anthony Rizzo of the Yankees, with whom Thomas has become friends.

This was the extent of my baseball career. My stats are 0-1 against Max Scherzer. Did this back in March and still one of the coolest things I’ve ever done. I think I missed his breaking ball by 2 feet 😂 I want a rematch!!!! https://t.co/y4YJCSFxou

“Goldy had been wanting me to take BP with him, and it just never worked out,” Thomas said.

But he had two weeks off following the West Coast Swing. A group of of baseball players trying to stay sharp during the lockout were training at Cressey. Thomas wasn’t playing a tournament that week and Goldschmidt asked him to come along.

“The pitchers were trying to stay fresh,” Thomas said, and by pitchers he was referring to the likes of Houston Astros ace Justin Verlander and Michael Wacha of the Red Sox.

“They had a routine and Scherzer was pitching a couple of innings and one of the guys said, ‘Do you want to stand in on Scherzer?’ And I was like, ‘Not really, to be honest with you,’” Thomas said. “I didn’t want to get hit.”

He was assured that Scherzer had more control with a baseball from 60 feet, 6 inches than Thomas did with a driver.

“They were giving me a hard time. ‘Don’t take the first pitch. You’ve got to swing,’” Thomas said. “So I stood in there. Swing. Swing. And then he threw a breaking ball on the last one and I think I missed it by 2 yards.”

Thomas said a radar gun on site had the fastballs clocked at 93 mph.

“It’s one of the coolest things I’ve ever done,” he said. “I wanted to make sure I wasn’t getting in the way. They were preparing. I would have loved to stay there and done more, but someone else was up. So I had my three strikes and went to the side. As soon as I struck out, everyone was like, ‘That’s all right. We’ve been there.’”

The only thing left is for Thomas to share the video. He doesn’t know why he hasn’t posted it and said he might at some point. It’s getting late in the year.