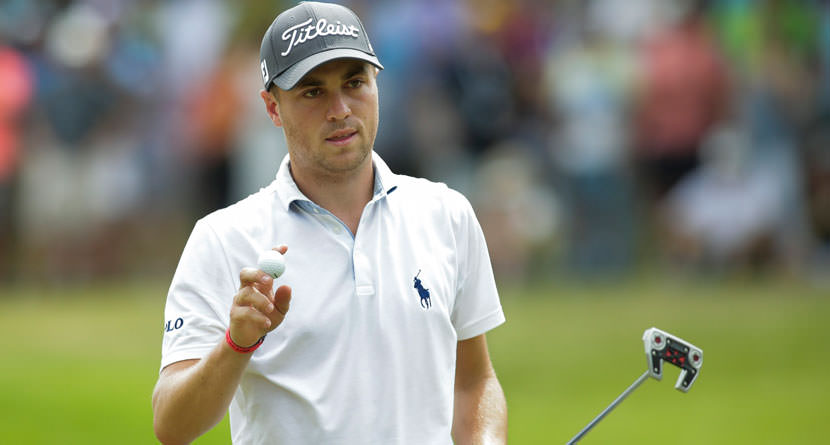 PGA Tour events typically make memories for those who come out to see the best players in the world ply their craft up close and personal. However, for one couple out at the Wells Fargo Championship Wednesday round, their memories will stick out for a completely different reason.

Sean Powell sent Justin Thomas a message on Instagram that caught the defending PGA Champion’s eye. Powell was requesting JT’s help to propose to his girlfriend, Andrea Cota. The plan played out perfectly in front of the cameras on the first tee at Quail Hollow.

“I said that sounds like a pretty cool thing and it would be fun to be a part of,” Thomas said of the initial interaction with Sean.

Thomas and Powell decided on the first tee to keep the secret going just a little bit longer.

“If it’s just randomly in the middle of a day and there’s cameras everywhere, it’s going to be pretty obvious or awkward,” Thomas explained. “(On the first tee) we could have at least played it off that the cameras were for some reason there for me and she didn’t know any better.”

Thomas greeted Powell with a bro hug and some pleasantries, then handed Powell a signed glove and Cota a “signed” golf ball that read, “Will you?” By the time Cota read the writing on the ball, Powell had already taken a knee and produced a ring from his pocket.

After saying yes, the assembled crowd celebrated and Thomas joined in for a group hug.

“It all worked out great and I’m really happy that I didn’t screw it up for him,” Thomas said.

JT also hooked up the newly engaged couple with some tickets for the week. Not a bad Wednesday at the course.

Thanks for letting me be a part of it! Y’all seem like great people and wish you nothing but the best in your future together ???? https://t.co/1xzzdjd3zY