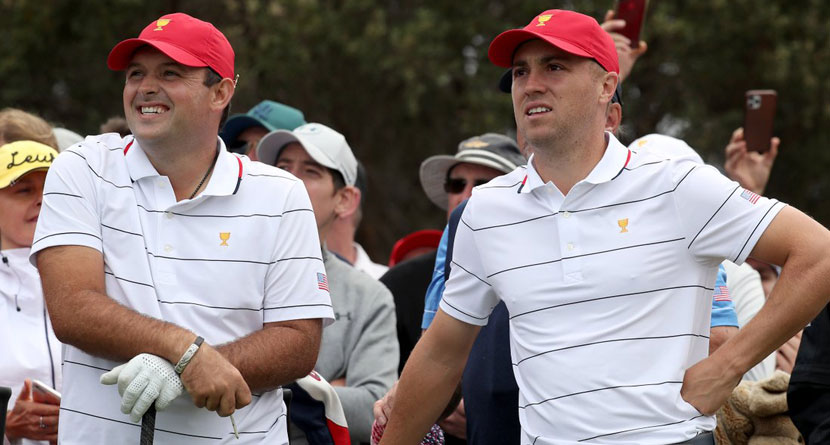 The overriding storyline in the build-up to Thursday’s four-ball session, which will signify the beginning of the 13th edition of the Presidents Cup, was the fallout of Patrick Reed’s controversial and ultimately contentious rules infraction only a few days prior at the Hero World Challenge.

While assessing his lie in a waste bunker near the green of the par-5 11th hole at Albany Golf Club in the Bahamas, video showed Reed moving sand from behind his ball with the flange of his wedge, a breach of Rule 8.1.

Reed was subsequently penalized two strokes — the difference at the end of the event between himself and eventual winner Henrik Stenson — but it was Reed’s response to the ruling that has stoked the fire.


Arguing that an unflattering camera angle was partially to blame for the assessing of the penalty, Reed came under fire for his disregard of the traditions of the game, most notably by Australian pro and International Presidents Cup team member Cam Smith as well as Golf Channel analyst Brandel Chamblee.

Happy to attempt to put the incident in the rearview mirror this week in Australia, the American team’s company line is that the breach of rule was simply that and not a further indicator of anything nefarious.

“If you do something unintentionally that’s breaking the rules, it’s not considered cheating,” Reed said. “I wasn’t intentionally trying to improve a lie or anything like that, because if I was, it would have been a really good lie and I would have hit it really close.”

However, despite echoes of the team having moved past Reed’s penalty at the Hero World Challenge, Reed’s teammate, Justin Thomas, took an opportunity during a Tuesday practice round to give Reed a hard time in a Royal Melbourne bunker as captured by Australian Ladies Professional Golf Tour player Adele Huggard.

In the clip, Thomas clambers down into a deep Royal Melbourne bunker and shouts to Reed, who he is playing alongside, “P-Reed, is this right?” as he hastily moves sand from behind his ball with his wedge.

The Australian fans gathered around let out a hearty laugh at Thomas’ ribbing.

Despite Reed’s staunch defense, which was echoed by American players, including playing captain Tiger Woods, the Reed storyline appears to be the overriding backdrop in front of which this year’s matches will be played.