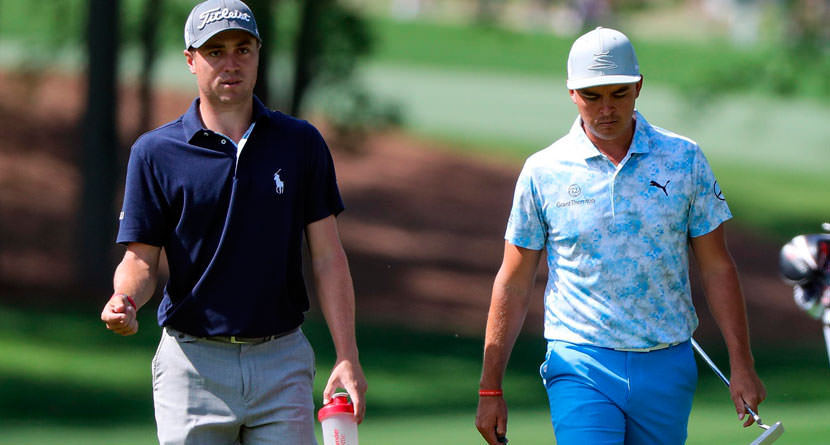 What good are friends if they can’t help you out of a slump? Justin Thomas went to one of his best friends on the PGA Tour, Rickie Fowler, after a poor putting round on Thursday at the Wells Fargo Championship and made an interesting request.

Thomas was “so desperate in terms of how (he) was feeling over the putter” that he asked Fowler if he had a backup with him in Charlotte. Despite being the Scotty Cameron Futura X5 that won Thomas his first major championship last year on the very same course, Thomas decided to give his gamer a rest in favor of Fowler’s backup.

“I didn’t actually see him until about 10 minutes before our tee time and he said he was going with it,” Fowler said after his round on Friday. “I told him after he hit his first tee shot, ‘Well, you’re kind of stuck now.'”

Tools: What Clubs Are In Rickie Fowler’s Bag

The two were in the same pairing, so Fowler got an up close and personal view of what one of the clubs he chooses not to use can do. Thomas’ putting improved by more than a stroke against the field, going from -0.783 in strokes gained: putting in round one to +0.558.

Interestingly enough, Fowler’s gamer putter was originally a backup designed for Tiger Woods. The familiar Newport 2 design of Woods’ Scotty Cameron is what Fowler uses on a weekly basis. Fowler always carries at least one backup with him on the road and this week in Charlotte, he happened to have two of them.

Realistically, on Friday at Quail Hollow, Woods, Fowler and Thomas were all using slight variations of the exact same putter.

“It was good to see him roll it better with it. I thought he made some good strokes out there,” Fowler said. “I never want to get in the way of his putting or whatever he’s doing, but we always try and help each other out. Like I said, I thought he made a lot better strokes today than he did yesterday.”

Rickie Aces 17 At Sawgrass, JT Is Not Amused

Fowler was asked if Thomas keeps rolling the rock the way he did on Friday, would he let his good friend JT keep the flat stick.

“Keep it? Well, he only lives a few hundred yards down the street, so it won’t be too far away. But if he keeps making putts, I might have to take it back,” Fowler cracked. “I’m not sure if I want (that). But no, we’ll see what he does. I know he goes back and forth sometimes, hits some with the Newport-style head. If he wants to keep using it, (he can) keep using it, but he’s stuck with having my name on the back of it.”

Thomas enters the weekend at even par while Fowler will begin Saturday’s round at 1-under par and six shots back.