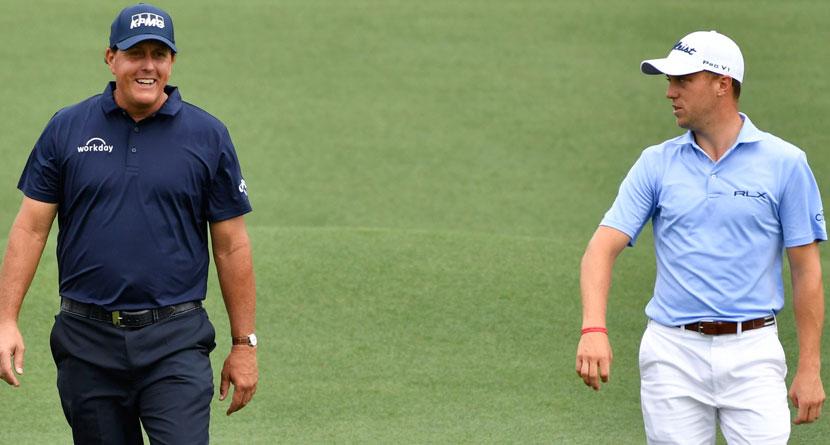 Justin Thomas is unquestionably one of the most talented players in the game currently, but five years ago during a practice round for the 2014 U.S. Open at Pinehurst, he was just another up-and-comer on the PGA Tour’s developmental Tour.

In Phil Mickelson’s latest “Phireside With Phil” series, the left-hander released the part one of a two-part series with Thomas on Thursday night.

As has become the trend, Mickelson sets up story by introducing his guest and then sits back and nods knowingly as they tell a story that inevitably grows the legend of Philip Alfred Mickelson.

Mickelson opened up by saying the two “played together before he was known as J.T. — he was just Justin.”

“It was the 2014 U.S. Open at Pinehurst,” Thomas explained. “I was on the Web.com — now the Korn Ferry Tour — at the time, so the crowds were a little overwhelming to start. We had a little match — myself and Jordan (Spieth) vs. you and Rickie (Fowler) — and I came right into the lion’s den.”

One of my favorite people on Tour …

My man JT (@JustinThomas34) joins me for a 2-part series to tell stories when we first played together. #PhiresideWithPhil pic.twitter.com/e0OhAcVYow

Thomas explained that he and Mickelson both missed the green in a swale to the right of the green on the fourth hole of Pinehurst No. 2. Faced with two tricky lies, Thomas opted to putt his given the tight, sandy and grainy turf they were playing off of while Mickelson pulled his 64° wedge.

Thomas ended up putting it up to tap-in range just inside where Phil’s ball would come to rest.

“We knew each other, but weren’t quite as close as we are now,” Thomas said. “I knew that you liked to talk smack and I was like, ‘Nice shot, Phil. Just a little bit outside of mine.’

“Without batting an eye, you just looked at me and said, “Yeah, my dad probably would have putted that one, too.'”

“I love it when you send shade because it allows me to bring the heat,” Mickelson said. “We all know you don’t sit fireside unless you can handle the heat.”

While the zinger from Phil was great, we never found out who won the match. However, with this only being part one of the episode, maybe there’s a thrilling conclusion yet to come.