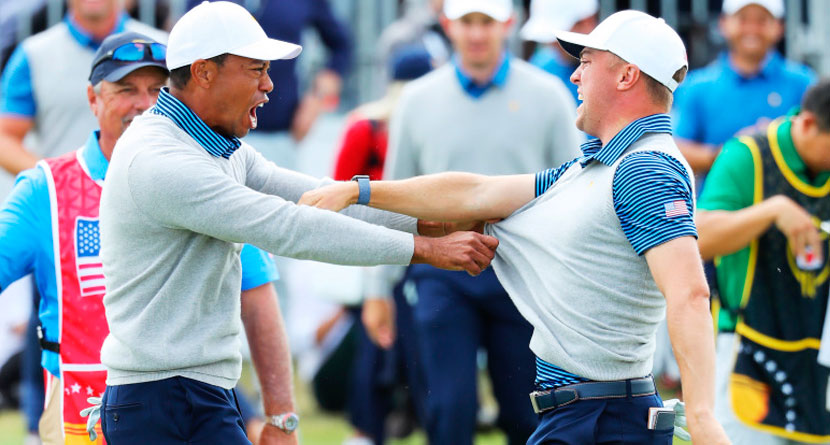 Midway through Friday’s foursomes matches at the Presidents Cup, it looked like there was a good chance that not only would the International Team win the session, but the Americans could be shut out and down 9-1 heading into the weekend.

Then things started to shift in the United States’ favor.

With the Internationals already claiming two points from the Adam Scott / Louis Oosthuizen vs. Matt Kuchar / Dustin Johnson and Abraham Ancer / Marc Leishman vs. Patrick Reed / Webb Simpson matches — both in 3&2 fashion — the onus fell on the trio of U.S. teams still on the course.

My goodness, there is a very real chance the U.S. get swept in foursomes and trail 9-1 going into tomorrow.

They’re not just beating the heavy favorites. They’re spanking them.

The first sign of a turnaround came in the Xander Schauffele / Patrick Cantlay match against Joaquin Niemann / Adam Hadwin. One-down after 14 holes, the Americans tied things up on the par-5 15th and a clutch putt by Cantlay on the 18th green gave the Americans their first sign of life.

In the next match on the course, Justin Thomas and Tiger Woods were watching that wave of momentum come back down Royal Melbourne’s fairways. Staying tied through most of the back nine thanks to some brilliant ball striking from Woods, Thomas had a similar putt to Cantlay’s to put a second U.S. point on the board on the day.

As the putt neared the hole, Tiger began to walk it in and the pair dropped their putters in unison and let loose an awesome celebration.

“I’m speechless,” Thomas said after the match. “I’ve been fortunate to make a lot of big putts and hit a lot of big shots, but to do it with my captain and an unbelievable teammate to win the match, and hopefully turn the tide of this Presidents Cup, it was awesome.”

“We were fighting, clawing our way back,” Woods said. “And JT steps up there and pours this thing in on the last hole, it gives me absolute chills, man, absolute chills.”

While momentum shifted to the American side, the final match on the course, Rickie Fowler / Gary Woodland vs. Cameron Smith / Sungjae Im came down to the 18th green as well. Trailing by two with three holes to play, the Americans won Nos. 16 and 17 to square the match and halved 18 to salvage a half-point and split the session 2 ½ to 2 ½.

Entering the weekend with 20 points up for grabs, the Americans three-point deficit looks a lot better than it did after Day One. Still, the International team is in the driver’s seat as the matches move into overdrive on Saturday in Melbourne.

“Look at the record we’ve had in the foursomes the last 25 years; for us to come out 2 ½ – 2 ½ in the session is like a win for us,” International captain Ernie Els said. “We would have taken that at the start of the day.”

Day Three will be a marathon day in Australia as there will be four fourball matches and then four foursome matches before singles on the final day.