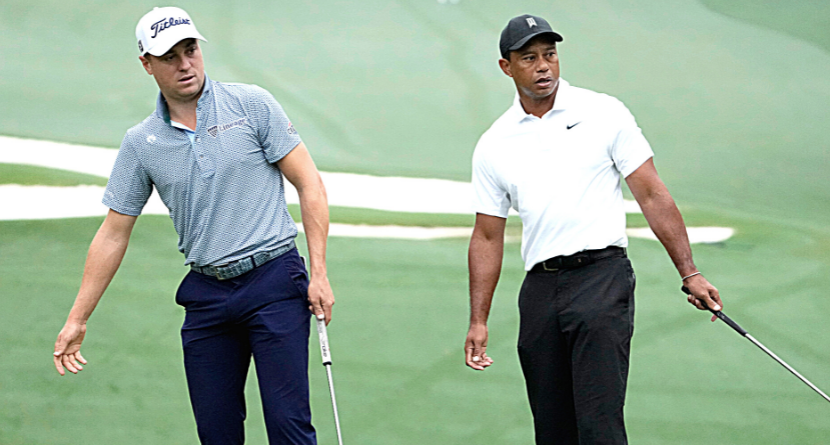 In his Tuesday press conference at Augusta National, Tiger Woods referred to his Jupiter Island neighbor and frequent practice partner Justin Thomas as his “little brother.” It’s a charming little story of someone who idolized Woods growing up to become a peer and later a confidant — with an all-access pass to the 15-time major champion’s mental vault.

But not everybody’s enchanted by the Tiger-JT bromance.

Jon Rahm said as much in his own sit-down with the Masters press corps. Asked if he’s ever sought advice from Woods, the 27-year-old Spaniard drew one of the day’s biggest laughs with his answer.

“I think there’s only one man in this field that hears advice from Tiger because I’ve asked before and I get nothing,” Rahm deadpanned. “So, you might need to ask Justin Thomas…”

🗣 “I’ve asked before and I get nothing.”

Former World Number One Jon Rahm says he has never been given much advice from Tiger Woods 🐅 pic.twitter.com/w2QlIi9BAB

The tone was entirely playful. And Rahm was just getting warmed up.

“I remember asking him at East Lake the year he won, before on the putting green in the practice round, ‘Hey, man, any tips for Bermuda? Or this and that,’” Rahm said. “He turned around and said, ‘It’s all about feel,’ and just kept going. I was like, ‘Cool, thank you.’

“I asked him at Albany once about chipping into the grain. ‘You just got to be shallow.’ Okay. Meanwhile, I turn around and JT’s there with him, and he’s getting a whole dissertation on what to do.”

Given the chance to issue a rebuttal, Thomas smiled and only slightly refuted Rahm’s stance.

“I’m not necessarily asking him a lot of specifics about here,” Thomas said. “When I’m asking him stuff at home, it’s just like I would ask Jon Rahm a question or ask Jordan [Spieth] a question. Any person or buddy that I respect their game and I think that they are really good and they maybe are a little bit better at something that I am not as consistently good at, like I want to learn, so I’m going to ask a question.

“I feel like Tiger’s been a good person for me to do that. But, yeah, I guess I’m very fortunate in that regard.”

Rahm, who’s known for his competitive fire, recently dropped to No. 2 in the Official World Golf Ranking. He’s seeking to become the fourth man from Spain to slip on the green jacket, a club that includes Seve Ballesteros, Jose Maria Olazabel and Sergio Garcia.