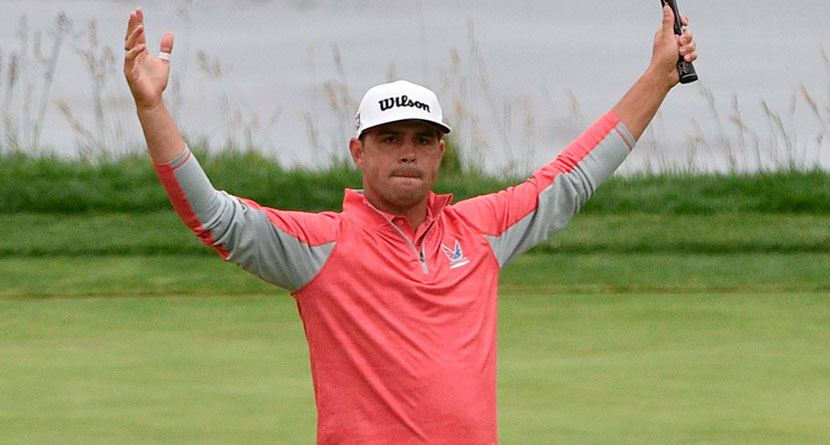 When it comes to anecdotal knowledge about PGA Tour players, there are a few greatest hits that golf fans are routinely reminded of — Jordan Spieth and Justin Thomas are good buddies, Dustin Johnson is an incredible athlete and of course, Gary Woodland used to play college basketball.

With Woodland’s triumph at this past week’s U.S. Open, that anecdote was literally the subject of the first question in Gary Woodland’s champion’s press conference.

Asked about the decision to choose golf over basketball in the early 2000s, Woodland explained that it wasn’t so much a decision as it was a realization. Playing as a freshman in 2002 at Division II Washburn University, Woodland and his squad played the top-ranked Kansas Jayhawks in an exhibition game.

“I mean, the moment really got forced on me,” Woodland explained. “I went to school, to Washburn to play basketball, and I always believed if basketball didn’t work out, I could fall back on golf.

“And our first game we played Kansas at the University of Kansas. They were ranked No. 1 in Division I, and we were ranked No. 2 in Division II. And that decision got forced on me really quickly. I was guarding Kirk Hinrich, and, like, okay, I need to find something else, because this ain’t gonna work. And that was my first game in college. I was a two-time state champion, All-State, blah, blah, blah, but that was a different level.

“And so when I transitioned to golf the next year, that was the first time in my life I’d ever focused solely on golf. It took me a little bit, but I got out here a year after school on the PGA Tour in 2009. It’s 11 years later now being out here.”

Hinrich’s career at Kansas featured a trip to the Final Four and a career that left his jersey in the rafters at Phog Allen Fieldhouse. He subsequently went on to play 13 years in the NBA for three different teams, the Chicago Bulls, Washington Wizards and Atlanta Hawks.

As for Woodland, his realization of playing against Kansas resulted in him transferring to KU to play golf, and the rest is history.