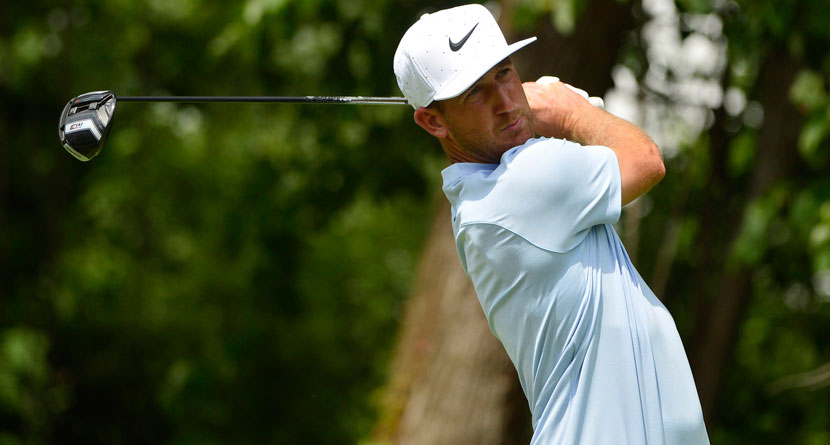 Kevin Chappell tied the PGA Tour record for consecutive birdies (9) in a round and shot just the 11th sub-60 round in PGA Tour history on Friday at A Military Tribute at The Greenbrier… and he still trails 36-hole co-leaders Scottie Scheffler, Joaquin Niemann and Robby Shelton by three strokes.

For Chappell, however, his bogey-free 11-under par 59 on Friday was made even more impressive when you consider that the California native hasn’t played a round of competitive golf in more than nine months after having a microdiscectomy and laminectomy at the L5-S1 of his back, which is where the lumbar spine ends and the sacral spine begins, after just three starts in last years fall season.

Beginning his round on the back nine, Chappell parred the 10th hole and then birdied the next nine taking him to the cusp of 59-watch with eight holes to play. Birdies on his 14th and 16th holes had him looking to break more records.

“I made (birdie) on seven to get to 11-under par for the day and I just told my caddie I wanted to shoot 57,” Chappell said. “I just tried to keep the mindset to attack.

“Ten months ago I was on the couch and couldn’t walk. So many people had so much to do with getting me back out here and getting me competitive. I haven’t accomplished the goal yet, there’s a long weekend to go, but this is a step in the right direction.”

It’s been an emotional return to the TOUR for @Kevin_Chappell. pic.twitter.com/eSFLfawy5e

Chappell was given the okay by doctors to play nine holes just four months ago. He built up his stamina hitting wedge shots — a few a day to start, gradually building up to playing his first nine holes in May.

“(I) was really, really diligent,” Chappell said. “Listened to my team and listened to my body. I remember playing the ninth hole, par-3, hitting the shot into the green and thinking, I can’t hit any more shots, I’m tired,” Chappell said. “To be here today, four months later, playing – starting my first PGA Tour event, it’s pretty surreal.”

Even as good as Chappell’s comeback story is, he still has a tall task ahead of him this weekend in West Virginia. His first-round of 1-over par 71 put him behind the 8-ball in terms of making the cut, much less contending.

Now, he’s three shots back of the three co-leaders and in position to all but seal the PGA Tour’s Comeback Player of the Year award.