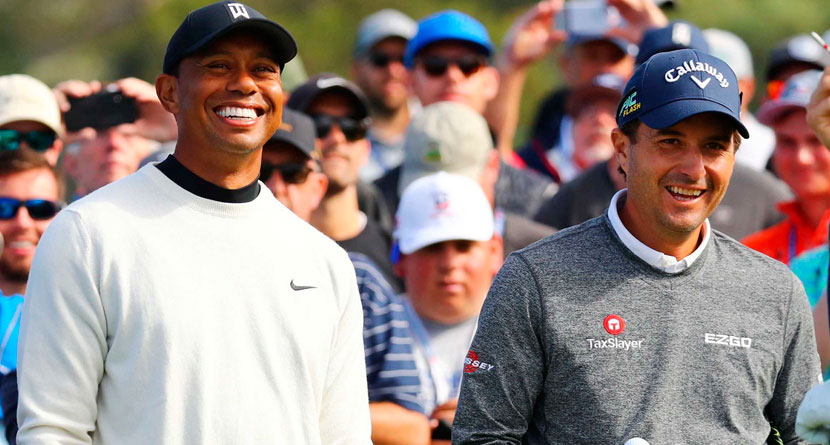 When Tiger Woods announced his four captain’s picks last week for the upcoming Presidents Cup, Kevin Kisner’s name was among those who didn’t get the call to go to Royal Melbourne.

The South Carolina native known for his dry humor and quick wit showed some signs of being disgruntled by the snub during a money match he played last week against some guys from Barstool Sports.

Playing at Palmetto Golf Club ahead of Kisner’s foundation’s annual event over the weekend, Kisner and Barstool’s Sam “Riggs” Bozoian squared off in a match in which the Tour pro gave the 6-handicap 14 strokes.

Kiz is giving me 14 shots today from the tips at Palmetto. I’m a 6.4 index. Who you got? pic.twitter.com/uw7DbtTpi0

Kisner got off to a hot start, going 3-under par through three holes, and the match only kept going in that direction until the 14th hole where Kisner holed a putt for the win and in the process of his expletive-laced celebration, he called out Tiger for the captain’s pick snub.

“Let’s f—-ing go! When it’s time to f—ing win, what does Kiz do? He f—ing wins! Tiger, where you at on that pick? F—k,” he said before removing his cap and shaking Bozoian’s hand. “Enjoyed it, sir. Appreciate your 5&4 loss.”

Kisner has a ridiculously good match play résumé, which features a 14-5-2 all-time singles record and a 2-0-1 team match play record at the 2017 Presidents Cup. While Kisner didn’t get the initial nod, he’s still in consideration for a possible injury replacement pick as the health of Brooks Koepka is up in the air less than a month out from the event.

Captain Woods said that he will play it by ear and let Koepka make the decision if he is going to play or not. If he chooses not to, Woods has until Wednesday, December 7th to make a replacement pick.