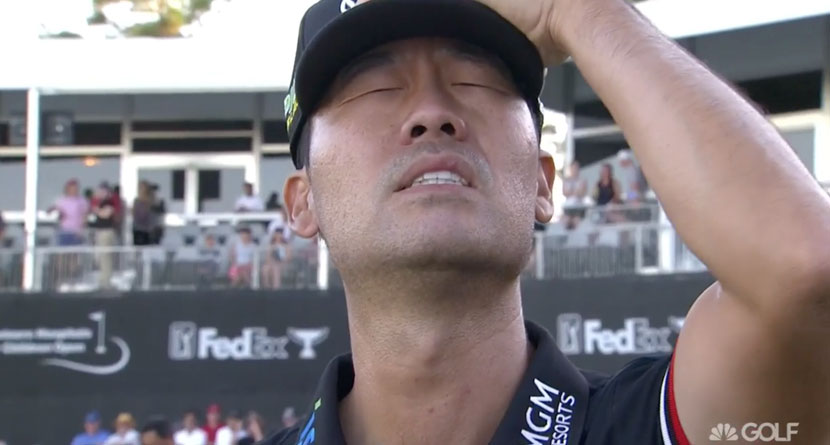 In the aftermath of Kevin Na’s third PGA Tour victory in his last 30 starts at the Shriners Hospitals for Children Open last week in Las Vegas, an emotional Na spoke in Korean to his fans in his native birth country

For 45 seconds, most golf fans who aren’t fluent in Korean could only pick up on context clues and assume that the win meant a lot to the 36-year-old. However, after GolfChannel.com procured a translation, the questions surrounding the statement became much more intriguing.

“To my Korean fans, for always supporting and believing in me despite all these false rumors, I want to say thank you,” Na said. “No matter what anyone said about me, I have been very happy. So as I kept my mouth shut, I feel like I showed you my feelings with my clubs today. Even as I bit my tongue, I have gotten to this point. Thank you to my fans again. I will see you soon at the CJ Cup.”

The cryptic message wasn’t expounded upon by Na in further questioning after the fact. He declined to elaborate, saying, “No, I think I’ve said enough.”

However, after a few days of reflection, Na opened up to Golf.com’s Alan Shipnuck about a controversy boiling over in his native country that was largely unknown to golf fans outside of South Korea.

“I haven’t wanted to talk about all of this but it’s been bothering me for quite some time,” Na told Shipnuck. “There have been too many rumors and false statements and it’s been very hurtful. Now I have a family and I feel I need to protect them and my name.”

The drama centers around an engagement that Na broke off in 2014. Na and his former fiancée met through a matchmaker in 2013 and were engaged by the end of the year. A month before their would-be November 2014 marriage, Na broke off the engagement.

Meeting with his former fiancée and her family in October 2014 ahead of the Korean Open that Na believed was a respectful way to formally end the engagement. Joining her fiancée’s family was their attorney, Sukhwa Lee, who was introduced as an uncle. The meeting quickly turned.

“Her dad told me, ‘If you don’t change your mind and marry my daughter I’m coming after you,'” Na said.

He did not change his mind, and a few days later, he was greeted at the Korean Open by the mother of his former fiancée holding an inflammatory sign that read, “American Golfer Na! Give back my daughter’s life as cleanly as you sent her stuff back.”

Na’s ex-fiancée filed a lawsuit that “included salacious details about the couple’s sex life” and “received titillating coverage in the Korean tabloids.” The lawsuit centered around his ex-fiancée making three long-term visits to stay with Na in Las Vegas during their engagement, which a judge deemed to be enough to consider her Na’s “common-law wife,” and entitled her to $400,000 of Na’s earnings.

Na paid roughly half of that, according to Golf.com, mostly for the costs of the called-off wedding and his ex-fiancée’s airfare to and from Las Vegas. He then countersued for defamation of character. The proceedings took years to resolve, but eventually, Na was vindicated.

“Not only did I win my suit, but she had to pay me close to $50,000, when a typical ruling in a defamation lawsuit is only a few hundred dollars,” Na said. “I think that shows the judge agreed how damaging the statements were.”

Kevin Na’s raw emotion in victory in Vegas was a window into five years of strife. For the first time, Na opens up about the long fallout from a busted engagement, including a defamation lawsuit, salacious rumors and his ex’s mom picketing the Korean Open: https://t.co/cQgsCHroyH

During the turmoil, Na married a longtime friend, Julianne, and the couple has since had two children. As his life settled and his game improved, Na figured that his relative silence and good play would prove beneficial in the eyes of the Korean press and his fans, however, every time he’s won, old stories get recycled.

“Every time I win the old stories and details get dragged up again,” Na said. “It feels like the media has been turned against me. They treat me like a foreigner.

“For five years I had stayed silent. The advice I was always given was just to play good golf and not focus on the nonsense and that’s what I did. But enough is enough. I hadn’t planned to say anything but I couldn’t help it. I’m sorry I rambled on so long and confused all the viewers in the U.S.”

How unburdening himself from the facts of his off-the-course life will benefit him on the course going forward will be interesting to see, but Na is playing the best golf of his life as he returns to his birthland for this week’s CJ Cup.

“I love Korea and the fans over here,” he said. “I’m playing the best golf of my life. This should be a great week. But we’ll see how it goes. I just want the fans to get to know the real me. In some ways I feel like I’ve been forced to hide. I’m not doing that anymore.”