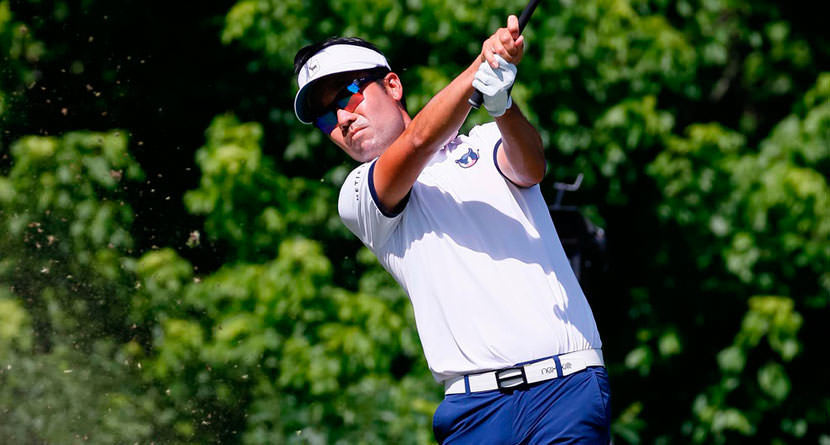 All’s well that ends well, and Kevin Na’s first round at the Fort Worth Invitational couldn’t have ended much better.

Already having posted five birdies and an eagle on his card through 17 holes, Na faced a predicament on the 9th hole at Colonial Country Club, his 18th of the day, that resulted in him and his caddie, Kenny Harms, getting into a heated discussion over Na’s club choice coming into the water-guarded green.

Na faced a 185-yard shot from the right rough with some tree trouble that would force him to work the ball left-to-right to get to the green. He was caught between a hybrid and an iron. We’ll let Na and Harms take it over from there.

Kevin Na went with his gut on this seemingly impossible shot …

and it paid off! ??? pic.twitter.com/UaVrbKEQNe

“You’ve got to go straight up into the air, which means it’s not going to go that far,” Harms rebuked. “Then you’re hitting a 40-yard cut. Where are you gonna go with that?”

“Yeah, but over the green’s dead,” Harms warned.

“It’s not gonna go over the green, Kenny,” Na replied.

After a few quiet seconds, Na looked for confirmation. “As long as you’re okay with this club.”

Na covered the water, but missed long and left — dead, according to his caddie. After getting a free drop from the grandstand, Na was faced with a 30-yard pitch shot that covered the length of the green — one he later called “almost impossible” — that eventually found its way to the bottom of the cup for a sixth birdie on the day.

The chip-in gave Na a one-shot lead after 18 holes over Charley Hoffman at 7-under par and a handful of chasers at 6-under par.