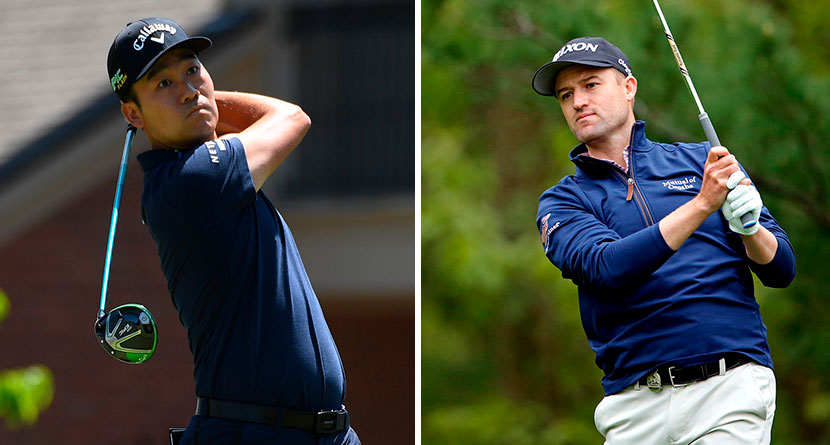 It’s been a few months since the golf world got up in arms about a good backstopping controversy.

The phenomenon, which has grown in prominence and given way to outrage over the past three years, occurs when a player deliberately leaves a ball unmarked near to the hole, which can be used by a competitor to “backstop” their ball against it.

If that sounds illegal, that’s because it is, but only if the two players outwardly agree to the practice instead of leaving things unsaid.


According to Rule 15.3a, “If two or more players agree to leave a ball in place to help any player, and that player then makes a stroke with the helping ball left in place, each player who made the agreement gets the general penalty (two penalty strokes).”

The official technicalities that make that gross situation above legal. pic.twitter.com/RByK3I6Lp3

While most Tour players have agreed that the fan outrage is overblown, the fuel added to the fire came when Jimmy Walker tweeted that if you happen to like a playing partner, you may not be in any rush to get to the green and mark your ball.

Usually a guy will ask if he would like to mark it. If you don’t like a guy you will mark anyway. If you like the guy you might leave it to help on a shot. Some guys don’t want to give help at all and rush to mark their ball. To each his own.

The debate over whether or not this is a growing problem in the professional game has been festering for years, but an instance of what many have viewed to be a clear and obvious backstopping over the weekend at The American Express has reignited the conversation.

Playing the 16th hole at PGA West’s Stadium Course, Russell Knox found himself in the 19-foot-deep greenside bunker. Knox hit a solid shot out of the bunker, which the PGA Tour tweeted to show how well he played the shot. The issue appeared when you could see playing partner Kevin Na’s ball in tight by the hole, it really hit the fan when Na could be heard in the clip saying, “hit my ball!”

The backlash came fast and furious.

That is a flagrant backstopping

How to cheat?? #backstopping

For Knox’s part, the 34-year-old Scot came out afterward and said that he was unaware of where Na’s ball was.

“Try going in that 20-foot deep bunker,” Knox wrote in response to the comments. “(I) had no idea his ball was next to the hole. You can’t see anything.”