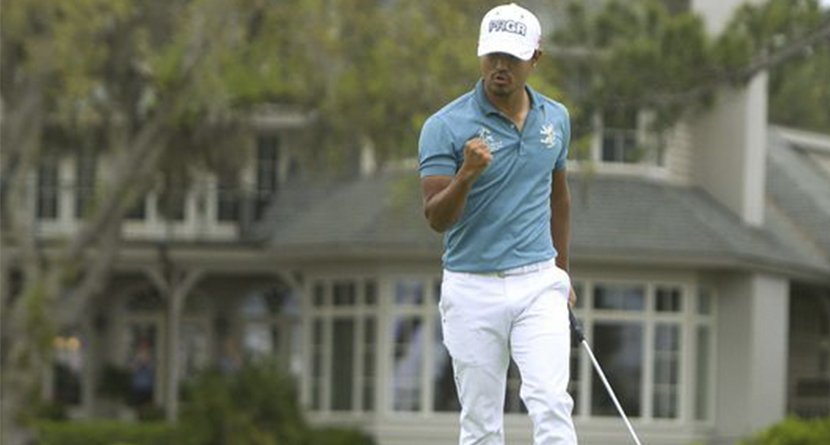 Most American golf fans had seen very little, if any, of Satoshi Kodaira coming into the week. The 28-year-old Japan native had played in some big events lately; he was at both the WGC-Dell Technologies Match Play and The Masters, but did not play well enough to get screen time.

He qualified for those tournaments based on a relatively high world ranking, which he acquired almost exclusively through success on the Japan Tour, but with a six-stroke comeback effort at the RBC Heritage, capped by a playoff victory over reigning PLAYERS Champion Si Woo Kim, Kodaira now has the hardware to signify that he is a PGA Tour Champion, and the notoriety that comes with that status.

Sunday was a rush to get everyone in and out at Harbour Town Golf Links, the host site of the RBC Heritage, as projected rainstorms forced the South Carolina-based event to significantly move up tee times, with the final group teeing off around 9am, more than five hours ahead of time.

Those not physically at the event were able to watch very little of the action, as it was unable to be televised, and those viewers missed some gripping play.

Kodaira shot a 5-under 66 to capture the clubhouse lead, and then saw contenders Kim, Luke List, and 54-hole leader Ian Poulter falter on the back nine.

Kim, statistically an atrocious putter, seemed to have the tournament in hand down the stretch, but a rough finish with the flat stick, even for him, dropped the 22-year-old South Korean into a playoff with Kodaira. Looking for his third PGA Tour triumph, Kim missed putts of 4, 5, 7, and 6 feet respectively, on the final four holes, and then watched his chances vanish when Kodaira nailed a 25-foot putt on the third playoff hole to win.

An RBC Heritage debutant, Kodaira’s impressive victory came at a place that is traditionally unfriendly to those with little experience.

A 2-over 73 in round 1 put Kodaira in a deep early hole, but a hot putter was the catalyst for a torrid second-round 8-under 63, the lowest score by anyone in the field over the four rounds.

As is typical for players who shoot an ultra-low round in a tournament, Kodaira was unable to replicate the next day. But a respectable 2-under 70 was at least good enough to get him on the periphery of the top 10, and still left with a prayer going into Sunday.

The short-hitting Kodaira got his Sunday off to a blistering start, carding birdies on the first three holes to propel his name among the leaders. He stayed close to the lead for the rest of his round, but given how many holes the other contenders still had left when Kodaria was finishing, it seemed unlikely that his 12-under clubhouse score would hold up.

Fortunately for Kodaira, Poulter, List, and Kim all caught bogey fever on the back nine, with each falling back and making that 12-under look a little better with each passing hole.

When Kim bogeyed 17, suddenly the score was tied, with List just one back. Kim and List both had phenomenal approaches on 18, with List landing 12 feet from the hole, and Kim landing just six. Yet, both missed their birdie putts, and that meant a playoff between Kim and Kodaira.

Kodaira missed a putt on the first playoff hole that would have won the tournament, then Kim did the same on the second playoff hole. Going to 17 for the third-playoff hole, pressure was high to finish up before the bad weather was set to arrive. Kodaira then won when a birdie putt finally dropped, a 25-foot effort.

What It Means For Kodaira

The victory at Harbour Town means that Kodaira will not become the next Shingo Katayama, Toru Taniguchi, Ryo Ishikawa, or Yuta Ikeda, Japan natives who tore up the Japan Tour, but have been unable to make any kind of mark on the PGA Tour.

Japanese golfers have historically struggled to gain and keep a strong presence on the PGA Tour, with Japan Tour stars rarely seeing their games translate in the U.S., but with Kodaira starting to take off, that could soon change, especially when factoring him in with five-time Tour winner Hideki Matsuyama.

In addition to all the exemptions awarded for this victory, Kodaira is projected to jump to a career-high 27th in the Official World Golf Rankings, which will move him ahead of much better-known American and European players.

In fact, prior to this win, it would have been hard to find another player ranked in the top 50 who had a lower name recognition than Kodaira. That should change after today.

While it was a poor final round for all of those in the 54-hole top 10, a number of others stepped up with great Sundays to improve their position and paycheck.

Patrick Cantlay surprised at The Masters last week when he missed his first cut in two years. Impressively, Cantlay was able to shake off that disappointment with a T7 at Harbour Town, largely aided by a final round 3-under 68 that moved him 13 spots up the final leaderboard.

Cantlay’s round included an eagle-2 on the par-4 10th hole that featured two fantastically fortunate bounces.

Bryson DeChambeau was the 36-hole leader after a 68-64 start before a disastrous 4-over 75, which included three holes of double-bogey or worse, in round three knocked him well off championship pace.

DeChambeau was back in pre-weekend form on Sunday, and by carding birdies on his final four holes, he posted a 5-under 66 which gave him a surprise finish of T3.

The low round of the day came from a player who was over par coming into Sunday, Harris English. A 6-under 65 that included four-consecutive birdies on the front nine saw English to rise 37 spots on the leaderboard and finish T32.

A month ago it would have been surprising to see Ian Poulter leading a tournament after three rounds, but after he won the Houston Open two weeks ago from the 54-hole lead, he has regained a significant amount of his positive reputation back.

Poulter had played the two middle rounds bogey-free, and after two pars on Nos. 1 and 2, he had reached 47 consecutive holes without a blemish.

It turned out that Poulter was saving those bogeys for Sunday’s back nine, as the popular Englishman collapsed down the stretch.

After turning in 1-under 35, Poulter was sitting at 14 under, and just one-shot behind playing partner Si Woo Kim. But then it all unraveled for the veteran as a bogey on the par-4 10th kicked off an eight-hole stretch of five bogeys and three pars, en route to a 4-over 75 that dropped him to T7.

Like a number of others in the field, Poulter found putting difficult when the winds started picking up some.

Matt Kuchar, 2014 RBC Heritage Champion, was at 8 under through three rounds, and needed the kind of day Kodaira had to become a two-time event winner.

An uncharacteristically poor putting round (a common theme among those in contention who struggled) doomed Kuchar to a 2-over 73 that dropped him from inside the top 10 to a share of 23rd place.

The worst round of the day came from another player who started the day in the top 10 at 8-under, Danny Lee, who finally looked to be turning things around after not producing a finish better than T58 in 2018.

Seven bogeys and a quadruple-bogey later, Lee had shot an 8-over 79, that left him in a tie for 55th.

Harbour Town was pleasantly surprised at the inclusion of world No. 1 Dustin Johnson into the field, after the South Carolinian had not played his home tournament since 2009.

Coming off a T10 finish at The Masters, DJ was never really in contention at the RBC Heritage, but after a pedestrian first three days, he looked excellent on Sunday, shooting a 4-under 67 to move up 25 spots on the final leaderboard to finish T16.

Johnson led the field in greens-hit for the week, showcasing his best stuff on Sunday by hitting 14 of 18 greens, despite the conditions.

“This is what I’ve always dreamed about. I didn’t think it would come this quickly, and yes, I will take up full time [PGA Tour] membership.”
– Satoshi Kodaira