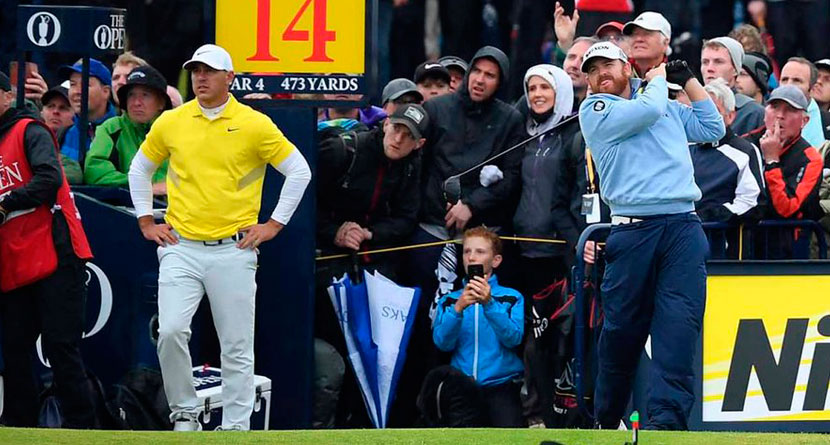 As soon as the final-round tee times at the 148th Open Championship were released on Saturday evening, a lot of eyeballs were drawn to the penultimate pairing of Brooks Koepka and J.B. Holmes.

While Holmes was six shots back and Koepka was seven shots back of eventual Champion Golfer of the Year, Shane Lowry, only part of the interest in the twosome was their unlikely chances of chasing down the Irishman. Instead, the issue of slow play was expected to be a sticking point, which it proved to be.


Koepka is one of the fastest players in the professional game and he hasn’t been shy about voicing his disdain for his peers who fall on the other end of that pace of play spectrum, where Holmes most certainly lies.

The Kentucky native has been roundly criticized for his pace by announcers, fans and players alike over the years, but there hasn’t been any movement or enforcement from the powers-that-be (to Koepka’s point), so Holmes’ pace has not changed much.

If you’re plumb bobbing a 1 foot putt with me I’m throwing your bag in a lake pic.twitter.com/uCrceicFaE

On Sunday at Royal Portrush, Koepka, Holmes and most of the later starters had to contend with some high winds and rain during the back half of their front nine, but that didn’t stop Koepka from pantomiming his frustrations during the round to an official and walking away from the green as Holmes was going through his putting routine.

Walking off 12 green, Koepka stares at an official and points to his non-existent watch.

After the round, Koepka did his best to avoid making a big stink out of Holmes’ pace of play, but pointed out what it is that makes him so slow.

“That’s what I don’t understand when it’s your turn to hit, your glove is not on, then you start thinking about it, that’s where the problem lies,” Koepka said. “It’s not that he takes that long. He doesn’t do anything until his turn. That’s the frustrating part. But he’s not the only one that does it out here.”

To make matters worse, Holmes was having one of his worst days as a professional golfer, signing for a 16-over par 87 to drop from solo third place into a tie a tie for 67th, besting just three other players who made the 36-hole cut.

As for Koepka, he shot a 3-over par 74 to stay in the tie for fourth place where he began the day.