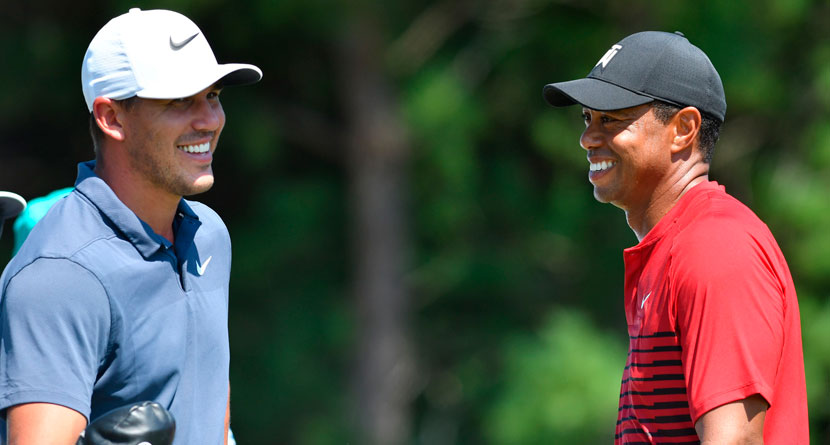 While Brooks Koepka has been on his historic major run over the past three years, it’s been Tiger Woods who has been his most consistent competition at the top of recent major leaderboards.

At last year’s PGA Championship, Koepka held off a surging Woods while it was Woods who was able to hold off Koepka at this year’s Masters.

Despite the two being friendly off the course, Koepka wasn’t eager to help out his friend and childhood idol when it came to giving him a crash course at this week’s Open Championship venue.

Koepka’s caddie, Ricky Elliott, is a native of Portrush as well as a current member and former employee at Royal Portrush. As a result, many are considering Koepka to have an even stronger leg up on the competition given Elliott’s familiarity with the layout.

Knowing that, Woods reached out to Koepka before the week in hopes of picking up on some of Elliott’s local knowledge during a practice round. Koepka’s response was profound in its silence.

“I said, ‘Hey, dude, do you mind if I tag along and play a practice round?’” Woods said. “I’ve heard nothing.”

Tiger texted Brooks to see if they could play a practice round together, Tiger hoping to get some inside info from Brooks’ caddie, who is from here. Tiger never heard back…. (stone cold Brooks.)

Koepka is keeping his man’s wisdom close to his vest, and planning on leaning on it during the tournament.

“Every hole I just step up on: ‘You tell me what to do. You’ve played it more than anybody,’” Koepka said. “So I just let him figure it out. He knows his spots to miss it, the spots to come in from. I’ll definitely have a little bit more confidence having him on the bag this week, knowing this golf course so well.”

Woods will kick off his quest for a fourth Claret Jug at 10:10 a.m. ET on Thursday alongside Matt Wallace and Patrick Reed while Koepka, in search of his first Open Championship, will go off two hours earlier alongside Louis Oosthuizen and Shubhankar Sharma.