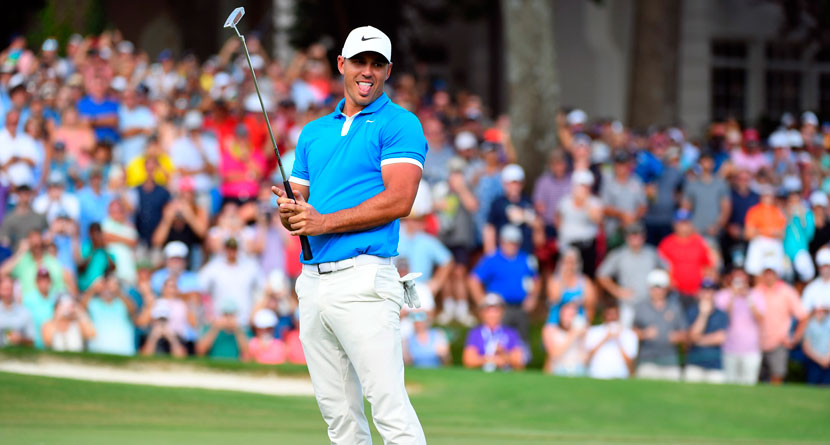 Playing this week’s WGC-FedEx St. Jude Invitational under the weather, Koepka turned some heads on Sunday when less than an hour before his marquee final-round tee time alongside Rory McIlroy, the four-time major champion had yet to step foot on the TPC Southwind property.

Brooks Koepka pulled up to the TPC Southwind clubhouse at 12:13. He’ll have less than 45 mins to warm up for final round pairing with Rory McIlroy. If Brooks wins, this is a serious power move @WGCFedEx pic.twitter.com/v0Is9SE5bJ

The time-crunched warm-up didn’t affect Koepka as he went on to win his seventh PGA Tour event, just his third victory at a non-major on the circuit, by three shots over Webb Simpson. Koepka revealed in his post-round press conference that he was fighting through an illness that had forced him to cut down on his practice time over the weekend.

“It doesn’t affect me hitting a golf ball,” Koepka said. “I don’t feel good. I haven’t felt good all week, but I don’t want to make an excuse, I’m not trying to complain. Just get on with it. People go to work sick all the time.

“I always take less time on Sunday. I played for three straight days, it’s hot, I don’t feel that great, so I’m not going to go out there and waste my energy on the range when I can do it on the course.”

?️ “To win it against him [McIlroy] was special!”

The shortened warm-up seemed to be the winning recipe as Koepka went out in bogey-free, 3-under par 32 on the front nine before adding two more birdies on his inward nine to cruise to the victory. He was able to better McIlroy, who struggled with an ice-cold putter on Sunday, by six strokes.

“St. Jude is here, FedEx is here, it gives me chills even thinking about it. It has been one of my favorite stops on tour for four or five years. To win here, this is really special to me.”

Brooks Koepka is just grateful and proud to put on a show here and win at @WGCFedEx. pic.twitter.com/QlNjTytRkA

Koepka earned $1.75 million for his victory, and more than likely wrapped up his second consecutive PGA Tour Player of the Year award. He’ll head into the FedEx Cup in two weeks as the top-ranked player in the world and on the season-long points list.