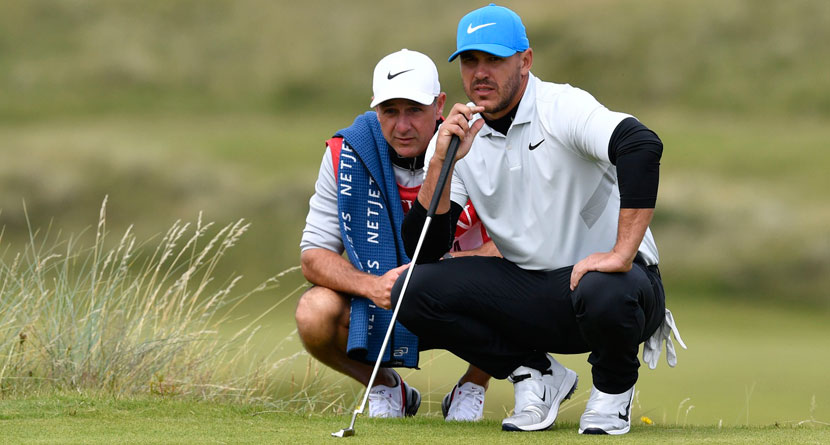 Brooks Koepka, admittedly, is always looking for slight — perceived or otherwise — that he can use to motivate himself.

In the recent past, Koepka has made note of being left off of a notables leaderboard at the U.S. Open, used comments made by Golf Channel analyst Brandel Chamblee, pointed out that fans rooted for his competitors and called out television producers for leaving him off tournament promos as motivational slights, to name a few.


Having now won four major championships — tied for third-most among active players behind only Phil Mickelson and Tiger Woods — producing a chip for his shoulder has become a bit more difficult, but it’s a tactic he doesn’t plan to abandon.

“There’s always a chip,” Koepka said ahead of this year’s PGA Championship. “I think every great athlete always has a chip. I feel like you look at Michael Jordan; I’ve heard him talk about having a chip on his shoulder, and I think that’s important.

This week at Royal Portrush, Koepka seems to have created a self-serving narrative that he’s hoping will spur him on to a Sunday charge. Despite being tied for fourth, Koepka trails 54-hole leader Shane Lowry by seven strokes, a result of what he says is the product of him being the worst putter in the field.

“Nobody has hit it better than me this week. I’ve hit it as good as I could possibly imagine,” Koepka said on Saturday. “I’ve putted the worst in the entire field, if you look at strokes gained. I don’t know if they have that. It’s been really bad. Very frustrating. Disappointed.

As it turns out, however, Koepka hasn’t hit it as well as he claims, statistically speaking, nor has he putted as bad as he has made it out to be.

Is Brooks Koepka really “putting it the worst” in the field at #theOpen? Well, he ranks 19th with 87 putts. That’s just 1 more than leader Shane Lowry and 2 more than second-place Tommy Fleetwood. Currently just 22nd in GIR though.

According to GolfDigest.com’s Dave Shedloski, Koepka ranks 19th in the field through three rounds with 87 putts, which is just one more putt than Lowry has needed. From a ball-striking perspective, Koepka is 22nd in greens in regulation — nowhere near the best in the field.

Like Koepka said earlier this year, he needs something to spur him on, and this week it appears to be a self-serving narrative that he’s pushing himself.

With the final-round tee times being moved forward by some two hours by the R&A to avoid expected inclement weather, Koepka is hoping that conditions deteriorate and make things tough on Lowry.

“I need (the weather),” Koepka said. “Being, what, seven back. Here you need some wind, you need some rain. You need anything that can kind of go your way. And that’s got to be an advantage. Especially the way I’m striking the ball. I’ve struck it so good. If it’s going to be windy, you need to be able to strike it good, control your flight, and figure out where you want the ball to end up. If it’s going to blow 30, it can get out of control very quickly.

“I just need to putt good one day.”