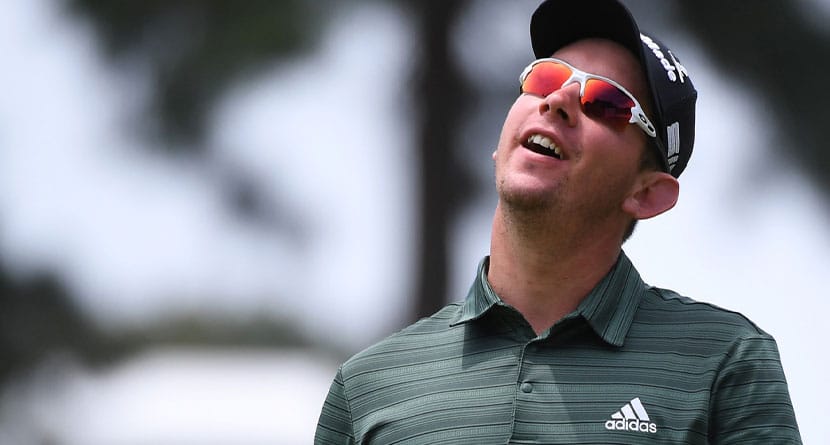 If you can’t laugh at yourself, then who can you laugh at?

That’s how soon-to-be PGA Tour pro Lucas Herbert is handling a traveling gaffe that left him, his caddie and his trainer nearly 700 miles from this week’s Korn Ferry Tour Finals event following a card-clinching tie for fourth place at the Albertsons Boise Open.

Still buzzing from his birdie on the 72nd hole, Herbert and his team headed to the airport with hopes of improving his status at the second of three KFT Finals events this week in Columbus, Ohio at the Nationwide Children’s Hospital Championship. The only problem was that there aren’t any direct flights from Boise to Columbus, so Team Herbert had to fly through Dallas.

The only problem: Herbert had booked the connection through Dallas to Columbus, Georgia instead of Columbus, Ohio.

Herbert relayed the story to the KFT’s Kevin Prise in the video above as well as to the Inside the Ropes podcast.

Flying into Georgia on the last flight of the night, Herbert and his team had to spend the night before getting up early and flying to Ohio, arriving on Tuesday afternoon.

“We all fly in, grab our bags and we go to the rental car desk to get our car. I had the Avis app and it was telling me that the car was there but something wasn’t matching up,” Herbert told podcast. “I was thinking maybe there were two airports and we were at the wrong one. Then I look at Google Maps and not only am I at the wrong airport but I’m at the wrong city.

“We got through the entire process of checking in, got our boarding passes, got on the plane and it was not until we got to the airport and looked at our location on Google Maps did we realize, We’re in the wrong state.

“If that putt hadn’t gone in on Sunday we probably would have got much angrier, but we just sat there for 15 minutes laughing at each other and thinking, How stupid are we?

“We all had moments where we thought, This is weird, but no one put two-and-two together. We got on the plane – which wasn’t very big – and there weren’t a lot of people on it. We walked into the airport when we landed and were thinking, This is not the terminal we flew into last time.

“There were a lot of moments when we looked back on it thought, Yeah, that makes more sense.”

Herbert’s short turnaround didn’t appear to hinder him too much as he posted a 2-under par 69 in the first round of the tournament, held at Ohio State University Golf Club’s Scarlet Course.