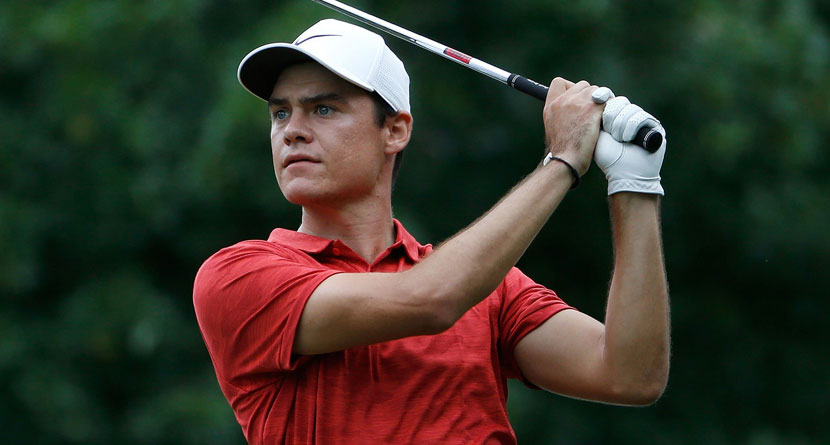 Tony Romo’s bid to make the cut at the Safeway Open on Friday included an etiquette faux pas that definitely got the attention of the group in front of him and appeared to garner a shocking reaction from PGA Tour rookie Kristoffer Ventura.

After a first-round 2-under par 70, Romo was struggling in his second round as he attempted to play the weekend for the first time in his four PGA Tour starts.

Reaching the par-5 16th hole at 6-over par for the round and 4-over par for the tournament, Romo laced a drive 297 yards down the fairway. Faced with 276 yards to the hole and believing the green was clear, Romo roped his 3-wood to inside six feet for eagle.

“The best 3-wood I’ve ever seen in like a month,” Romo’s playing partner, Michael Gellerman, said.

With the etiquette of Ventura’s actions in question — standing in Romo’s line and appearing to spit on the ball — the clip went viral.

While reasonable minds can agree that given the situation, Ventura was well within his rights to take a fair stance regardless if that meant he would be standing in Romo’s line, the spitting allegation was one that would hypothetically have no place in the game.

Ventura cleared up the suggestion that he spit on the ball prior to the third round on Saturday.

I definitely did not spit here. I moved my head to see if I had left any spike marks because I knew I was close to his line, hate to disappoint you guys

“I definitely did not spit here,” he wrote in a tweet responding to the video. “I moved my head to see if I had left any spike marks because I knew I was close to his line. Hate to disappoint you guys.”

Ventura went on to shoot a second-round 2-under par 70 to make the cut on the number. Romo would miss the eagle putt, settling for birdie and missed the cut by seix strokes.