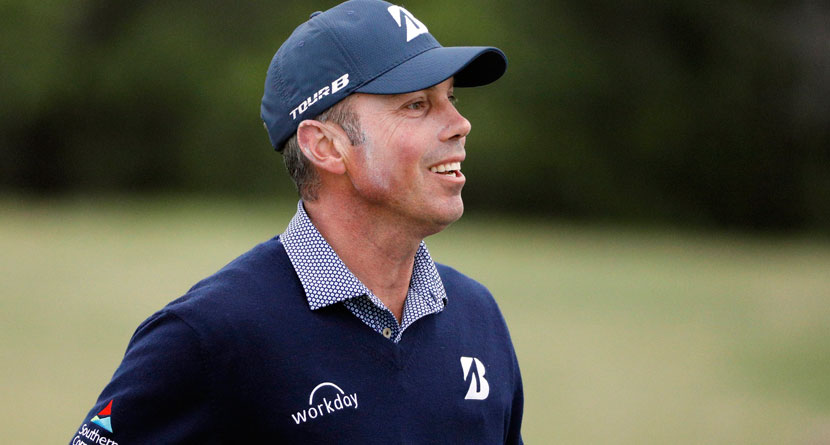 Matt Kuchar has had a tough year from a public relations standpoint, but to his credit, he has smiled his way through it all.

That blissful ignorance that he often expresses resulted in a pretty funny mix-up on Thursday at the Tour Championship in Atlanta.

The talk of the golf world over the past few days hasn’t been the culmination of the FedEx Cup Playoffs; it’s been the man who stands alone atop the leaderboard through 36 holes: Brooks Koepka.

Koepka and ESPN released the No. 1 player in the world’s nude photos from his March photoshoot for the upcoming ESPN The Magazine Body Issue on Thursday, and it got the golf world buzzing… except for Kuchar.

Following an opening-round 4-under par 66 on Thursday, Kuchar met with the media and the topic du jour was broached. Kuchar, however, had no idea what the press was talking about.

confused dad Matt Kuchar got crossed up again and the results are hilarious (sorry Tiger?) pic.twitter.com/uqZF0rYpGX

Asked if he had seen Koepka’s nude Body Issue photos, Kuchar responded that he hadn’t. When he was informed that if he wanted to see nude Brooks Koepka photos, “they’re out there,” Kuchar’s head went to the much-publicized hacking that released Tiger Woods’ naked photos in 2017.

Koepka Fires Back: Don’t Have The Balls To Do It

Upon hearing the implication that a leaked photo of Koepka had been released, Kuchar was corrected and told they were “artfully done” by ESPN The Magazine.

“I thought you were really telling me…” he began. “I wanted to see that. Alright. Maybe next time.”

With his head still in a pretzel, Kuchar needed another question to process what was asked before he finished his session with the press. He would go on to shoot 2-over par 72 in the second round to enter the weekend at 6-under par total, seven back of Koepka with two rounds to go.