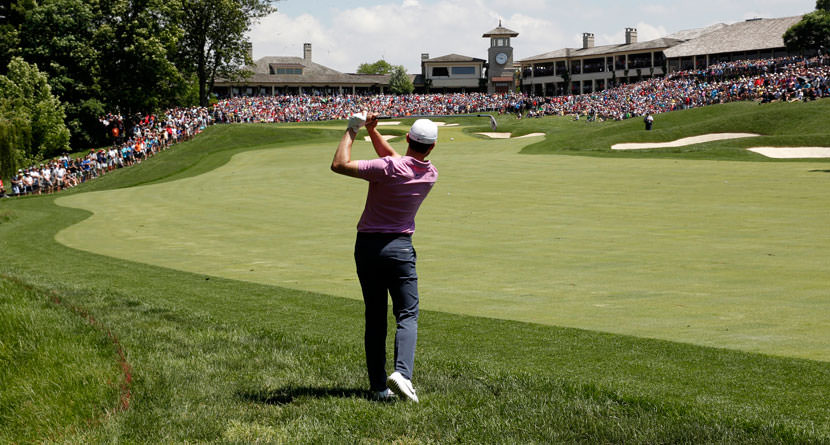 Down the stretch on Sunday at Muirfield Village Golf Club, it looked like hoisting the Memorial Tournament trophy was only a matter of time for Kyle Stanley. The Washington-state native bounced back from a double-bogey 5 on the par-3 12th to birdie four of his next five holes and put himself in terrific position to win the event outright on the 72nd hole.

Stanley took on the dogleg at the home hole only to see his ball ricochet some 45 yards backward and across the fairway to a gnarly lie in the rough.

What an awful bounce for Kyle Stanley at the 72nd hole. pic.twitter.com/DXJAiAeqJi

Stanley was only able to advance his second shot 96 yards. He hit a good wedge to 15 feet, but was unable to convert, which put him into a three-man playoff with Bryson DeChambeau and Byeong-Hun An.

Again on the 18th tee, Stanley caught an unlucky break trying to cut the corner, which resulted in a ball so far above his feet that he could only advance the ball a few yards into the rough.

A second consecutive bogey resulted in his elimination from the playoff. DeChambeau would go on to birdie the final hole, defeating An who hit a fantastic flop shot from left of the 18th green.