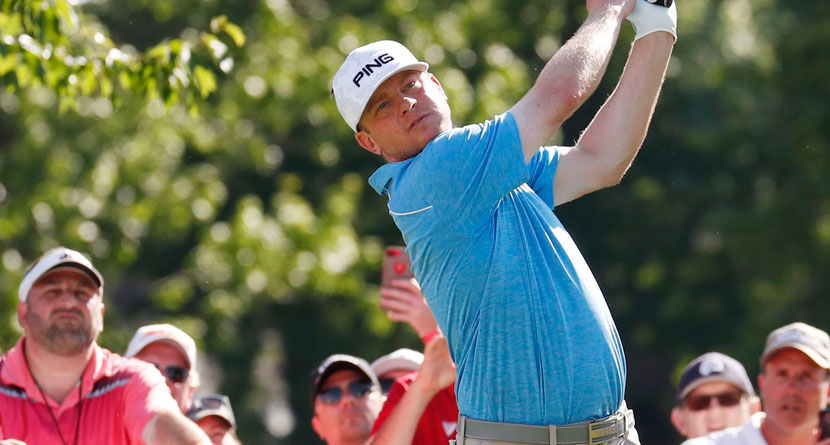 On a day when golf already had a feel-good winner on the European Tour, Nate Lashley took home the crown at the inaugural Rocket Mortgage Classic by six shots over Doc Redman.

While the relative unknown’s breakthrough win was inspiring enough, knowing the backstory that built up to Lashley’s win makes the victory even more impressive.

The 36-year-old Lashley has endured a lifetime’s worth of tragedy, lowlighted by the death of his parents and girlfriend in a plane crash in 2004. The three had traveled to Oregon to watch Lashley, then a junior at the University of Arizona, compete in the NCAA West Regional.

“It was just shock,” Lashley told ESPN in 2017. “Shock and disbelief. It was a really tough time, especially that week with the funerals and the memorial service. I was just kind of out of it.”

Only getting into the tournament on Wednesday as an alternate, Lashley shot an opening round 9-under par 63 to take a lead that he would never relinquish. Coming up the 18th fairway on Sunday in Detroit with a six-stroke lead, Lashley admitted that his emotions swelled back up as he took in the moment.

“Just really emotional right now,” Lashley said. “Truly thankful I got into the golf tournament. Winning on the PGA Tour was always a dream and getting that done today was a great accomplishment.”

Round 1 leader in Detroit, Nate Lashley, has had to overcome many hurdles, none bigger than personal family tragedy.

This is his story. pic.twitter.com/FXNpsr6tnv

Lashley’s first win on the PGA Tour came after a solid rise over the last few. He had won three times on the Latinoamerica Tour in 2016, once in 2017 on the Korn Ferry Tour and posted a pair of top-25 finishes in 18 starts on the PGA Tour in 2018.

Lashley has played in 15 events so far this season, producing a top-10 in Puerto Rico in February and notching a T28 at the U.S. Open two weeks ago. Now with the win, Lashley will have his status locked up for the next two years on the PGA Tour, a spot in this month’s Open Championship as well as one in next year’s Masters.