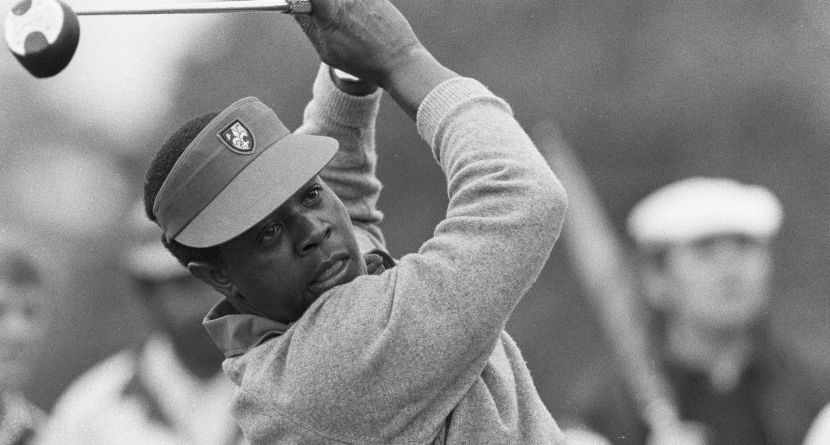 Someone has to go first. For Tiger Woods to shatter barriers with his iconic victory at the 1997 Masters, propelling himself to superstardom on such a meaningful stage, Lee Elder had to crack open the door, becoming the first Black golfer to play in the event 22 years earlier.

Elder, who died Monday at age 87, shouldered the heavy burden that comes with pioneering such a cause — “I was shaking so badly, I did not know if I was even going to be able to tee up the ball,” he once said of his appearance at the 1975 Masters — so people of color could finally feel welcome in a sport that had historically shut them out.

“Lee Elder was a pioneer, and in so many ways,” Jack Nicklaus told PGATour.com. “Yes, he was the first Black player to compete in the Masters Tournament, but that simply underlined the hard work Lee put in to further the cause of everyone who has a dream to play on the PGA Tour and perhaps thinks there are too many barriers before them. It was wonderful that the Masters Tournament and Augusta National paid a well-deserved tribute to Lee by inviting him to be an Honorary Starter for this last Masters. That morning, you could see the joy in Lee’s face, and Gary Player and I were honored to enjoy that moment with him. That memory will remain special for so many, including me, for many years to come.

“Lee was a good player, but most important, a good man who was very well respected by countless people. The game of golf lost a hero in Lee Elder. Barbara and I send our heartfelt condolences to Lee’s wife Sharon and their entire family.”

To Nicklaus’ point, simply appearing in these events wasn’t enough for Elder, who counted four PGA Tour trophies among his 16 professional wins and helped the Americans capture the 1979 Ryder Cup in his lone national team apearance, all the while enduring death threats and disapproving crowds.

Tributes and remembrances poured in from every corner of the golf world as news of Elder’s death circulated Monday. Below is a collection of those messages:

Lee Elder was a pioneer in so many ways. Yes, he was the first black golfer to play in @TheMasters, but that simply underlined the hard work Lee put in to further the cause of everyone who has a dream to play on the @PGATOUR and thinks there were too many barriers before them.

Lee Elder has passed away at the age of 87.

In 1975, he made history as the first African American to compete in the Masters Tournament.

Lee was honored this past April at Augusta National and his legacy will surely live on. pic.twitter.com/1o05rephKt

Today we are saddened by the loss of our teammate and friend, Mr. Lee Elder.

A true trailblazer and gentleman, we honor Lee’s memory and the lasting impact he made on the game. pic.twitter.com/ylHnI6W7jo

This is how I’ll remember Lee Elder. In a moment at this year’s Masters where he completely deserved to turn the spotlight on himself, he instead chose humility. Immense. RIP pic.twitter.com/VLgd7vhNR6

We lost a legend. My friend Lee Elder was an incredible man. He is gonna be so missed. All my love to his Wife and family. God Bless u Lee pic.twitter.com/tssjZU84js

Lee Elder: A true trailblazer that made a lasting impact on the game of golf.

It was an honor to know Lee Elder. He inspired so many in life & in golf… his legacy will live on forever. Rest in peace 🙏🏻 https://t.co/NetifQYCYh

Look out for the ones coming behind you. Lee Elder was an incredible contribution to the game and made history because of his talent, not just because he was African-American. I’m fortunate to have had the chance to learn from him. My prayers to the Elder family at this time. pic.twitter.com/FBPtzdmkro

Here’s the moment (at the 1974 Monsanto Open) when Lee Elder in effect punched his ticket to the 1975 Masters. Amazing photos. Amazing man. 📸 Bettmann pic.twitter.com/OTF1jMTZdU

“He gave hope, and that’s something that wasn’t there before.”@ESPNCaddie reflects on the change Lee Elder brought to golf. pic.twitter.com/VKMb5HRORz