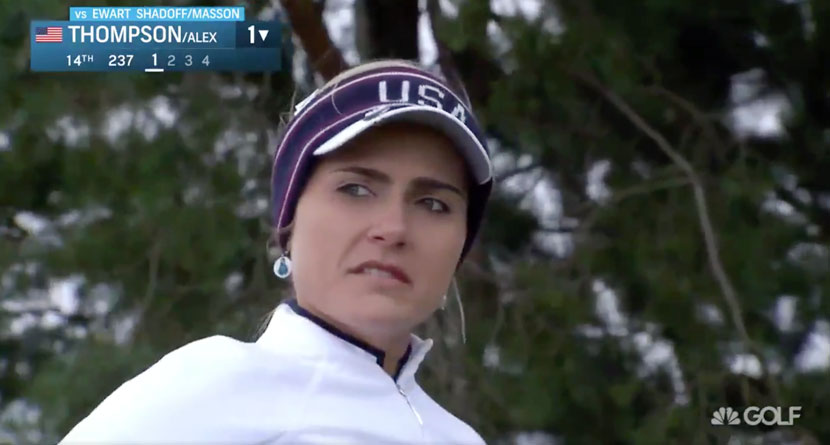 Tensions run a little high at the Solheim Cup as we saw earlier in the week with some verbal sparring between members of Team USA and Team Europe, so it should be no surprise that those emotions are carrying over to the course.

While the usual theatrics have been on full display — fist pumps, high fives and getting the crowd revved up — something you don’t typically see caught on camera occurred down the stretch of Saturday afternoon’s fourball session.

Playing alongside Marina Alex, Lexi Thompson was teeing off on the 237-yard par-4 14th hole when she lost her shot out to the right of the drivable green. Thompson attempted to use some body language to steer the shot back towards the target before giving the signal that it was missing right.

Someone nearby at Gleneagles wasn’t going to take any chances, however, and shouted emphatically, “FORE RIGHT!”

According to Sky Sports, the outspoken call came from her caddie, Benji Thompson (no relation).

The call caught Thompson off guard and she snapped back at her caddie saying, “Jesus, it’s not that bad.”

The ball came down just right of the green, but barely inside the ropes and just a few feet from a handful of spectators. The interaction left the Golf Channel broadcast crew in laughter as lead analyst Judi Rankin relayed, “That’s the best of today.”

The clip made the rounds on social media, typically getting one of two reactions: it was a funny moment; or the caddie was right in his aggressive call.

Thompson and Alex would go on to make birdie on the 14th hole, and Alex made a birdie on the par-5 16th to square their match, which would end in a halve.

Entering Sunday’s singles matches, the U.S. and Europe are tied at 8-8. The Americans need 14 points to retain the cup while the Europeans will need 14½ to win it.