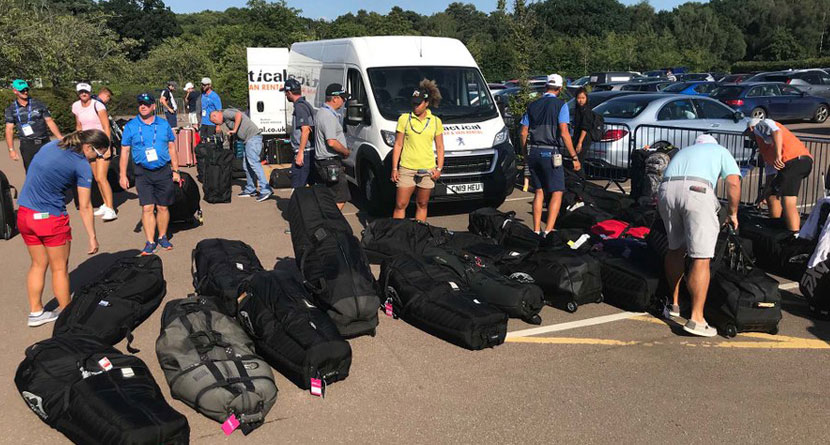 Thanks to caddie Benji Thompson going above and beyond the call of duty, Lexi Thompson (no relation) was spared a travel nightmare on Monday… sort of.

But, even still, it caused some unintentional headaches for fellow golfers in England this week for the Women’s British Open.


According to Golf Channel’s Randall Mell, Thompson’s bag was one of 38 player bags being driven from the site of last week’s Evian Championship in France to Woburn Golf Club outside London for the Women’s British Open.

Wright had started his journey with the luggage when he received a call Sunday night saying that Lexi Thompson had accidentally left her passport in her golf bag – documentation she needed to fly out of Geneva and into England.

Wright was asked to pull over and wait for Benji Thompson, who would take a cab to gather the passport and return it to his boss.

The delay meant Wright wasn’t able to drop the bags off in England until 5 p.m. on Monday – 5-6 hours later than planned – causing many players to miss out on a practice round in the final major of the LPGA season.

Lexi Thompson still had travel issues once she got the passport, as her British Airways flight was canceled, which didn’t allow her to arrive on Monday.

The Caddie Network reached out to Benji Thompson via email to find out what Sunday night’s adventure was like for him.

Here’s what he told The Caddie Network:

I got a text from Lexi around 9 o’clock Sunday night saying, “Dude we might not get outta here.”

I was at the hotel down in Geneva and she was still in Evian. I texted back and forth with Lexi and her dad for about an hour trying to figure out the options and how to get the passports back to them quickly. The best option, I thought, was for me to travel and get them at the course on Monday and either fly back with them or FedEx them. Somehow, Lexi’s dad, Scott, got in touch with the driver and he said he was about an hour south of the Geneva airport.

My flight was at 7:20 a.m. on Monday, and the 5:15 a.m. shuttle bus was picking me and my caddie buddies up. After speaking with the front desk and a cab driver, and making sure they took American Express, I was on my way around 10:45 p.m. Sunday night. I knew I wasn’t going to get much sleep and my only thought as a caddie was, “my player needs me and I’m going to do whatever it takes to get the job done.”

I had my GPS going as well as the cab driver’s. The driver was driving fast for me to get there and return quickly. He was doing great until about 3 miles away from our destination. I told him we needed to go to the right, and he insisted we go to the left. He got aggravated with me (trying to give him directions) and in another language, he yelled at me! I figured at that time it was best to just sit back and let him do his job. I could absolutely tell we were going in the wrong direction and had to sit back and just let it happen. After 20 minutes of him going the wrong way, looking at my phone texting with my wife (her thinking I’m getting kidnapped), Lexi and Scott helping with location of driver and van, curving roads and about to puke, he decided to ask for my help! We got turned around and finally made it to the gas station where Ian, the van driver, was parked. Our 28-mile drive had turned into about an hour and a half after we left the hotel.

How did an honest mistake by Lexi Thompson cause a delay in practice for nearly 40 players at the Women’s British Open?

We pulled up and Ian had about five golf bags and three pieces of clothing luggage outside of the van on the ground. He’s a little older and it had taken a toll on him, and, hey, this wasn’t his problem or job to do. I immediately knew this was about to be a nightmare of a task to get to her travel golf bag. After I cleared the area, I started pulling these bags off and getting them out of the way. No wonder the players and caddies who used this service didn’t have anything with them when they arrived in London (It was all in the heavy-ass golf bag traveling cases)! Once I got about 30-40 bags out, I saw Lexi’s on the bottom, and cha-ching! I knew where the passports were and was able to dig down and get them out. I made sure I had both of them and put them in my pocket.

Now is when the fun started… Every one of those heavy bags I removed I had to put back. They had to be packed very tight and there is a certain way for all this to fit. Somehow, I got all of the bags back in the van, and I still don’t know how I did it. Looking at all of it out on the ground I was telling myself there is a way and just kept plugging. When I finished, it took the cab driver and Ian holding the bags and me sliding the door to make it close.

Finally, I’ve got the passports, all packed up and headed back with the cab driver. We made it back to my hotel in about 45 minutes and it was now 1 a.m., and I couldn’t thank him enough for taking me and waiting while I did it. The cab fare cost $300 Swiss francs, which is pretty much the same as the dollar right now. I’m not worried… Lexi is getting that bill!

All I can say for myself, Lexi and Scott is that we are very sorry for the delay that we caused everyone. We never even thought it would delay Ian and cause all of this trouble. I’m sure that every player in the field would have been trying to do the same thing that we were. If you don’t have your passport you can’t leave, and at the time all we were trying to do was track down the passports!