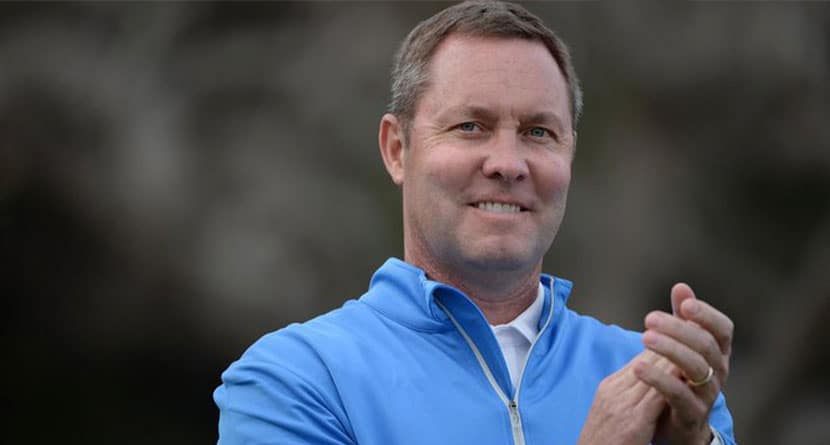 It didn’t take long for outgoing LPGA Tour commissioner Mike Whan to land on his feet.

The USGA announced on Wednesday morning that Whan would be filling the vacancy left by outgoing Executive Director Mike Davis with Whan’s tenure beginning later this summer.

“Mike Whan is a proven, successful and transformative leader, not only in the golf industry but throughout his entire career,” USGA President Stu Francis, who oversaw the CEO search process, said in a statement. “He has shown a unique ability to understand how the environment is changing in global golf and how to quickly and thoughtfully adapt an organization to meet those changes. Importantly, Mike is already a trusted peer for so many key stakeholders in the industry, and his existing relationships will not only help the USGA, but will also help advance the game.”

Whan’s journey into golf began after a stint at Proctor & Gamble in the 1980s and 90s where he rose to become the director of Marketing for oral care. He got into golf in the mid-1990s on the equipment side with stops at Wilson Sporting Goods and TaylorMade before switching over to hockey. He got back into golf in 2010 when he was hired to be the commissioner of the LPGA Tour.

Whan’s accolades at the LPGA are well-documented. He increased the number of tournaments on the LPGA Tour’s schedule to 34 from 24, increased purses from $41.4 million to $76.5 million, and grew television hours from 125 hours per season to more than 500 hours.

“As someone who grew up loving this game, I have always had huge respect for the USGA and its role in leading our sport,” Whan said in the USGA’s announcement. “The game has given me so much throughout my life, both personally and professionally. I know I have a lot to learn, but I’m truly excited about this role, as it gives me the opportunity to not only give back to the game, but to also work hard to leave it stronger.”

Whan will be thrown into the fire almost immediately after he begins, inheriting a somewhat fractured relationship with some of the best players in the world and having to deal with the ongoing distance debate. Given his equipment background, Whan will be in a unique position having seen both sides of the coin.

“The last thing I’m going to do is become the head of the USGA who is going to try to stick a company’s $100 million in R&D in some box and say no more innovation,” Whan told GolfChannel.com’s Jaime Diaz. “I really believe that innovation, the investment that the manufacturers make in the game of golf, is one of the things that makes our sport better than so many other sports. So we don’t do this without the voice and the help of the manufacturers in the process. That won’t be easy. But that’s one of the things that makes me excited about it.

“I do like the people we’re talking about doing this with. I’ve lived their life. I know what it’s like to have a bunch of money in inventory and R&D and trying to push the envelope. We’re not going to take the fun out of the game. We’re not going to take the innovation out of the game. We’re just going to make sure that the game is just as fun and innovative in 100 years as it is today. And finding that balance, I’ll be the first to admit, won’t be easy. But I’m excited about a group that is not backing away from something just because it’s not easy.”

Whan also said that he intends to adjust the thinking about the USGA, both for the elite Tour pros all the way down to weekend golfers.

“I want the golf world to perceive the USGA as a partner,” he said. “In growing and protecting this game. And making it more inviting. I know sometimes we gotta make tough decisions. But I don’t just want to be the cop of the game. I want to be the person who is in this with you.”