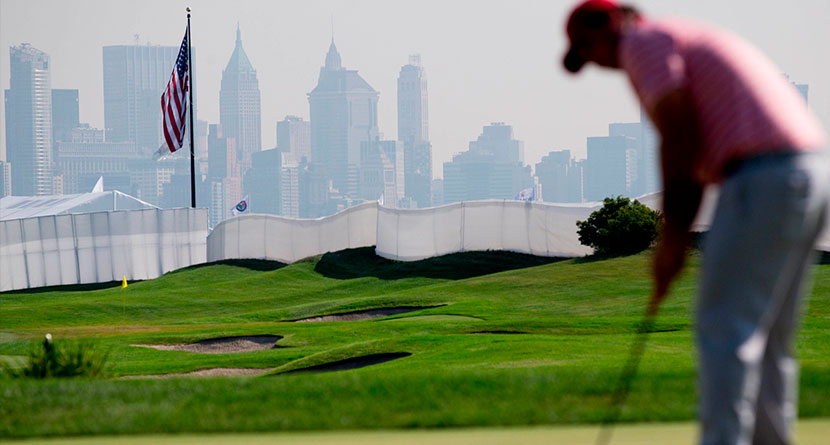 Liberty National Golf Club, one of the most exclusive and expensive clubs in the United States, is embroiled in an environmental showdown with a neighboring park as the club seeks to expand its property to include more waterfront property with vistas of the New York City skyline.

The club insists that the 22 acres of parkland that it would purchase from the state of New Jersey, which would be used to build three new holes, would be paramount for drawing the PGA Tour and other high-profile events to the Jersey City course as it would make more room for infrastructure and hospitality.

The issue is that the outcropping of land in question, known as Caven Point, is a migratory bird habitat and “was purchased with state and federal funds, including money meant to conserve land and water,” according to a New York Times article written by Tracey Tully.

“If we are not able to accommodate what these tournaments need, then they will simply go somewhere else that can,” Chris Donnelly, a spokesman for Liberty National, told The Times.

Tomorrow at Liberty National Golf Club, the Northern Trust kicks off the FedEx Cup Playoffs. Liberty National is a terrific tournament venue – a challenging layout with exciting risk/reward holes and incredible views of the New York City skyline and Verrazano Bridge. Will be fun! pic.twitter.com/K69iYM7A0j

“To me, it’s really just an obscenity,” Rick Cordner, the treasurer of Friends of Liberty State Park, a group opposed to the golf course expansion, said. “It breaks my heart to think there could be a bulldozer out there plowing it under for a golf course.”

Liberty National has hosted The Northern Trust, a PGA Tour FedEx Cup Playoff event, as well as the 2017 Presidents Cup, but according to Tully’s article, the size of the property had become a concern for the Tour.

“It’s true that as the PGA Tour, and the FedEx Cup playoffs specifically, continue to grow in stature and interest among our fans, media and partners, so does the need to make certain the proper footprint is in place,” PGA Tour spokesman Joel Schuchmann told The Times.

As part of the club’s proposition, they are also proposing using the land that will be used for hospitality and infrastructure during tournaments weeks to house a First Tee program for area children. Another argument the club is touting is the economic impact hosting a PGA Tour event can have on the area.

“Each of these PGA events, each one, contributes tens of millions of dollars into the Hudson County and New Jersey economy,” Liberty National’s lobbyist, Eric Shuffler, testified at a Senate budget hearing in December.

Liberty National is lobbying to amend legislation, the Liberty State Park Protection Act, that aims to prevent all but small private development within the park. Opposition fears that should the state allow land purchased with conservation in mind be sold off to the highest bidder could spell trouble not only for Caven Point, but other parks around the country.

“If you can privatize land purchased with Land and Water Conservation dollars, you’re jeopardizing most of our national parks,” said Greg Remaud, the director of the NY/NJ Baykeeper, a nonprofit conservation organization. “It’s one of our bedrock precedents for land conservation.”