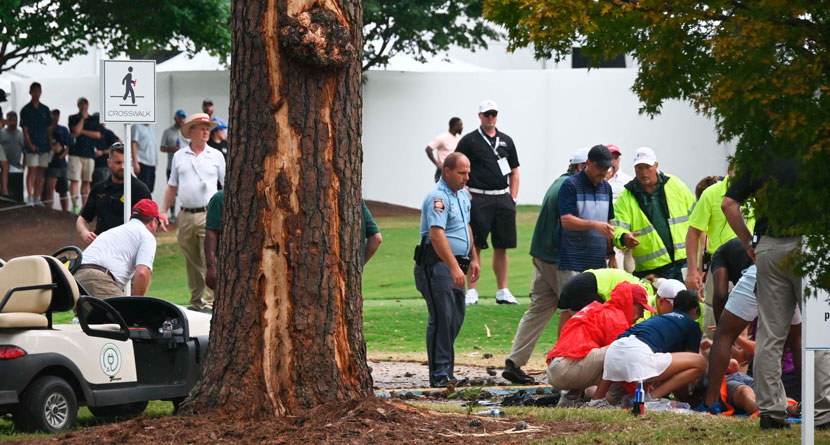 A run-of-the-mill weather delay on Saturday at the Tour Championship turned dire when a lightning strike stuck a pine tree near the 16th tee at East Lake Golf Club in Atlanta and injured six people.

PGA Tour officials blew the horn for inclement weather at 4:17 p.m. on Saturday afternoon with the leaders having only played five holes. Less than a half hour later, a pair of lighting strikes rocked East Lake — one by the maintenance area and the other by the 16th tee.

According to a statement from the PGA Tour, the fans were injured by debris caused by the strike. Five of the six were transported by ambulance to Grady Memorial Hospital in Atlanta. The other fan was treated on-site and released.

“The emergency service people were right on the scene, got those people off there quickly,” Mark Russell, a Tour vice president for rules and competition, said. “We understand they’re not life-threatening injuries.

“When we suspend play, we encourage everybody to leave and take shelter anywhere they can. We opened up hospitality areas that are grounded, a lot of other places like that. You’ve got a lot of people, and you have to do that quickly.”

“Forecasting the weather, the safety that goes along with it, that is critical to us,” Tyler Dennis, the PGA TOUR’s Chief of Operations, said. “We have a lot of scenarios throughout the year where … there’s a very high degree of certainty that there will be storms coming. And there’s a lot of other days when we look at it and we see, as it was today — I believe it was a 50-60% percent chance of storms from 3:00 to 6:00 this afternoon — and we just have to evaluate it and make our best decision when we make the schedule.

“Obviously when it comes down to suspension of play … we don’t leave any room for error there. Safety is a huge priority for us.”

Play was suspended for the remainder of the day with players resuming their third rounds at 8 a.m. ET on Sunday. They will play the conclusion of their round, regroup and play the final round as expected.

Justin Thomas will begin Sunday with a one-shot lead over Brooks Koepka and Rory McIlroy. Xander Schauffele is two shots back and Chez Reavie and Paul Casey will resume their third rounds three shots back of Thomas.