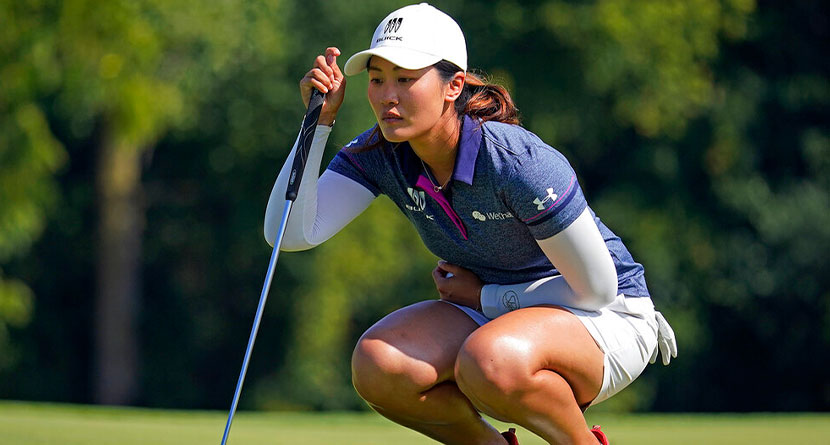 CINCINNATI (AP) — Xiyu “Janet” Lin of China opened with five birdies in six holes, birdied all but one of the par 5s and had an 8-under 64 on Thursday for a one-shot lead over Nasa Hataoka in the Kroger Queen City Championship.

The LPGA Tour returned to Cincinnati for the first time in 33 years and was greeted with a gorgeous day and plenty of good scoring at Kenwood Country Club.

That included a remarkable performance by 14-year-old Gianna Clemente, who made it through Monday qualifying for the third week in a row on the LPGA Tour and this time has a chance to play all four days. Clemente played bogey-free for a 70.

It did not include Lexi Thompson. One week after she played in the final group and didn’t make a birdie until the 18th hole to tie for 16th, Thompson didn’t make a single birdie in her round of 76, her highest of the year at a regular LPGA event. She had a 77 at Muirfield when she missed the cut in the Women’s British Open.

Lin is coming off a tie for seventh at the Dana Open, showing signs of life after a good start to the year. Playing in the afternoon, she opened with three straight birdies on the back nine, made par, and then added two more birdies.

“That was a dream start. You can’t ask for a better start,” Lin said. “So I just tell myself, ‘Need to keep going.’’

Her lone bogey came on the par-4 seventh toward the end of her round, and she responded with her ninth birdie of the round to regain the lead over Hataoka.

“I still do need to adjust my tee shots, but other than that, my iron and putting is good. I just have to keep that going,” Hataoka said.

The surprise was Clemente, who splits time between her native Ohio and Florida and lost in the championship match of the U.S. Junior Girls this year.

For her third straight start, the teenager made only two birdies and very few mistakes. And she wasn’t entirely satisfied.

“I feel good about it. Could have been a little better. I can think of a couple putts that maybe I should have made,” Clemente said. “But it was all right. I definitely know that I can go lower than that, so I’m going to go work on my putting a little bit and we’ll get that fixed up a little bit and hopefully it’ll be lower tomorrow.”

Former U.S. Women’s Open champion A Lim Kim and Sarah Kemp were at 66, while the group at 67 included Atthaya Thitikul of Thailand and former Women’s PGA champion Sei Young Kim.

The most exciting round belonged to Paula Creamer in her second tournament back from having her first baby. She shot a 72 that was far from even. Creamer holed out from 104 yards with a gap wedge for an eagle on par-4 fifth hole. Three holes later, Creamer made a hole-in-one with a 7-iron.

That’s two eagles in one round, along with three birdies. But she also had five bogeys and a double bogey, and had to settle for at least being inside the cut line going into Friday.

“I made a lot of putting mistakes and did some mental errors here and there. Unfortunately, my scorecard is a roller coaster. But that’s golf,” Creamer said.

“I feel good with where my game is at. I know it’s an up and down thing, but I just need to stay on path with what we’re doing,” she said. “I really do think it’s going to produce great things here eventually.”