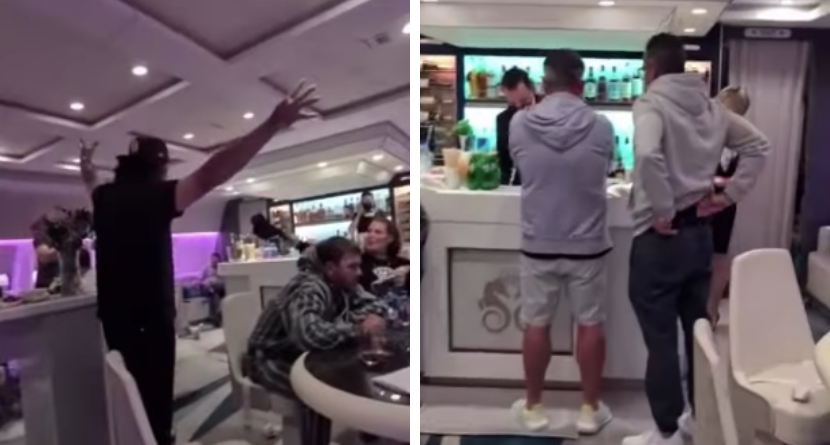 Say this for Greg Norman and his LIV Golf benefactors: they don’t skimp on any detail.

The latest evidence of LIV’s lavish spending surfaced on social media Thursday in the form of a walk-through video tour of the circuit’s party plane.

In the footage, which has since been scrubbed from several accounts, you can see players, caddies and family members mill about the cabin of the monstrous jet as Queen’s “We Are the Champions” blares over the loudspeakers. A triumphant Pat Perez, he of the final-round 80 in Portland, basks in the victory for which his Four Aces teammates did most of the heavy lifting.

A bountiful supply of food and beverages are visible as the person shooting the video moves from one section of the plane to another. Luxurious plane seats appear mostly empty, with folks gathering instead at circular tables or waiting in line for booze.

More prominent players, like Dustin Johnson and Brooks Koepka, pop into frame but without exhibiting any of Perez’s, uh, enthusiasm.

“Absolutely the coolest plane ever,” Perez’s wife, Ashley, said in an Instagram reply. “We partied our a—- off the entire way drinking [$3000-$5000] bottles of wine it was fully stocked with. LIV is the best thing that has happened to all of us. Best tour ever. Hands down.”

You can see the video, which was originally shared by TikTok user michaelfarley1976, by clicking below: