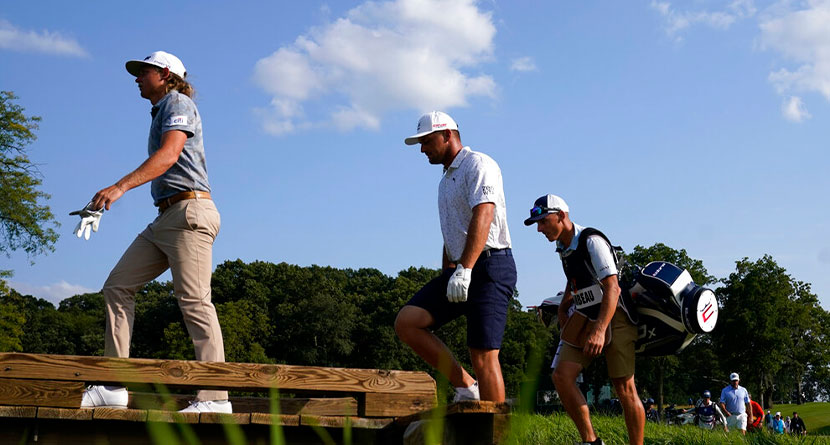 In this contentious year of disruption and hyperbole, the raw numbers would suggest the global golf space is big enough to share.

The difference, aside from LIV Golf providing triple the prize money, is that only one of those circuits received credit from the Official World Golf Ranking.

That needs to change. The question is how quickly.

Greg Norman, the CEO, commissioner and chief evangelist for Saudi-funded LIV Golf, applied in early July to be part of the OWGR system. The process historically takes about a year, which even by golf standards seems slow.

Besides, there has never been a tour in history like LIV Golf.

Regardless of how it attracted so many players — seemingly limitless money from Saudi Arabia’s sovereign wealth fund — find another “start-up” tour that started out with Dustin Johnson, Brooks Koepka, Phil Mickelson, Bryson DeChambeau, Patrick Reed and Cameron Smith. They have combined to win 11 majors in the last decade.

The OWGR leadership would be foolish not to bring LIV Golf into the ranking system, and it should make it a priority. Just not this year. There’s only one event left, this week in Saudi Arabia. And while LIV Golf is not a typical newcomer to world golf, points never have been awarded retroactively. There’s no need to start now.

These guys knew what they were getting when they signed up: money. If they thought world ranking points would come easily — or even quickly — that would be the same misguided thinking as Norman texting Sergio Garcia in February that the PGA Tour couldn’t ban players “for one day let alone life.”

Interesting to see how insistent Norman was (in these texts with Sergio) that the PGA Tour wouldn’t and couldn’t suspend players.

“They cannot ban you for one day let alone life.” pic.twitter.com/foSDSIOg2L

PGA Tour suspensions, backed preliminarily by a federal court, are in their fourth month.

As much as Norman talks about wanting to be part of golf’s ecosystem, LIV Golf doesn’t look like the other tours the OWGR tries to measure.

LIV Golf has only 48-man fields that play 54 holes with no cut and with a guarantee of $120,000 for finishing in last place (roughly the equivalent of 18th place in Las Vegas). There is a team element, and whether that affects a player’s performance when he’s out of contention is irrelevant. No other tour has that.

“We’ve hit every mark in their criteria, so for us not to get points is kind of crazy,” Bryson DeChambeau said last week. Remarkably, or maybe not, no one challenged his statement because LIV Golf misses more marks than it hits.

The six main tours that are part of the OWGR’s technical committee — which ultimately will review the LIV Golf application — all have primarily 72-hole events.

There is room for 54-hole events, but that typically is for developmental tours, like the Mena Tour, which few people knew existed until last week. Even when the previous OWGR formula was used and such tours awarded minimal points (four) to the winner, the minimum was raised slightly when it was a 72-hole event.

Why it has to be 72 holes is a separate debate, though the British Open has been that way since 1892 and the U.S. Open since 1898. Some might call that precedent.

However, it’s worth noting that since 1983 — when the PGA Tour was able to keep complete records — players who had at least a share of the 54-hole lead went on to win 39% of the time. The same percentage applies to majors.

Norman, of all people, would not be surprised by that.

And so the question becomes: Is it equitable to treat LIV Golf the same way the OWGR measures all the other tours that predominantly have 72-hole events with a cut?

This is what should take time — maybe not a year, but certainly not overnight.

Norman isn’t doing himself any favors with a not-so-clever attempt to expedite the process by aligning with the Mena Tour (an acronym for Middle East and North Africa). The Mena Tour entered the OWGR family in 2016 as a developmental tour with 54-hole events. It’s so far down the ladder that its leading players now have access to the Asian Development Tour.

Norman gave the players an update in August in which he claimed the OWGR is inaccurate without including LIV Golf. He had the players sign a letter in September to the OWGR saying that for it to maintain trust, it should award points retroactively.

And in October, the LIV golfers became official members of the Mena Tour. Norman thought they should get world ranking points immediately. The OWGR said it would need more than a 48-hour notice.

“When they keep holding it back, they’re going to just keep playing a waiting game where we’re going to keep dropping down in the rankings to where our points won’t ever matter,” DeChambeau said.

That much is true. There could be as few as six LIV Golf players left in the top 50 by the end of the year, and the number will shrink when it starts up its 14-event schedule in 2023. Still to be determined is if LIV Golf will adjust its format (perhaps by introducing a cut).

Even then, the new formula is not favorable to smaller fields. The PGA Tour not only has most of the top players, it has depth. LIV Golf players will still be at a disadvantage when it gets world ranking points.

The only thing that will grow at a rapid rate is their bank accounts.