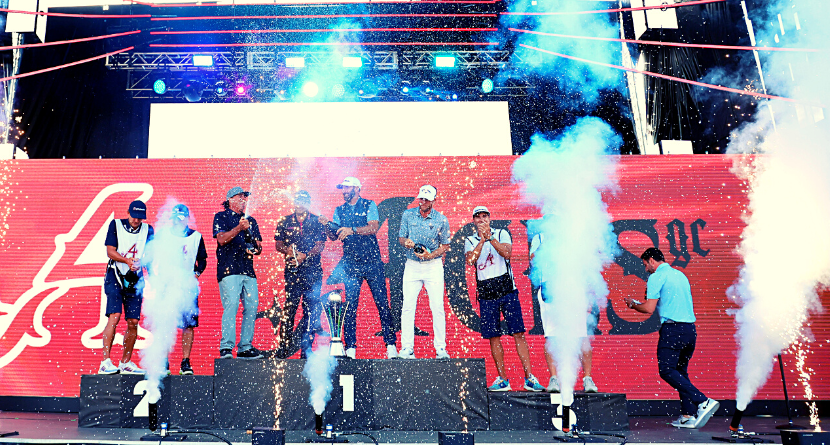 Talor Gooch went there. He went there hard. And now he’s paying for it.

You might’ve missed Gooch’s outrageous post-round interview after he and his LIV Golf teammates — Four Aces, for those scoring at home — were victorious in the circuit’s Portland event over the holiday weekend. Here’s the money quote:

“I haven’t played a Ryder Cup or Presidents Cup, but I can’t imagine there’s a whole hell of a lot of difference,” Gooch told interviewer Troy Mullins. “This was as cool as it gets. We’ve been saying it all week. The energy is just different, it’s awesome.”

I’ve had lots of LOL moments with LIV, but this is undisputed number one 😆

Witnesses to this whopper included Patrick Reed and Dustin Johnson — “Captain America” and the man who notched five points for the Americans at Whistling Straits, respectively.

They looked appropriately gobsmacked. Amazingly, though, the perpetually aggrieved Reed backed up his teammate at the expense of his legacy as a Ryder Cup hero.

“You know, it was awesome from start to finish,” Reed said. “I mean, just the start of the week … really the first couple days with having no fans and just seeing how electric and how pumped up all the guys were getting, it felt like I was playing a team event back in Ryder Cups, Presidents Cups and events like that where everyone is just all in.”

Gooch was swiftly skewered on social media — and elsewhere — for making such an outlandish claim.

“I’ve had lots of LOL moments with LIV, but his is undisputed number one,” tweeted Mackenzie Hughes.

“I’ve seen some funny stuff online, but this is one of the better ones,” added Justin Thomas.

JT wasn’t done. Asked to assess the atmosphere at the JP McManus Pro-Am on Monday, Thomas couldn’t resist another swipe.

“I’m just blown away by what today is and what this weekend and week has been,” Thomas said. “It’s going to be impeccable. The golf course is beautiful, it seems like it’s great for spectators.

“I mean, it feels pretty close to a Ryder Cup today.”