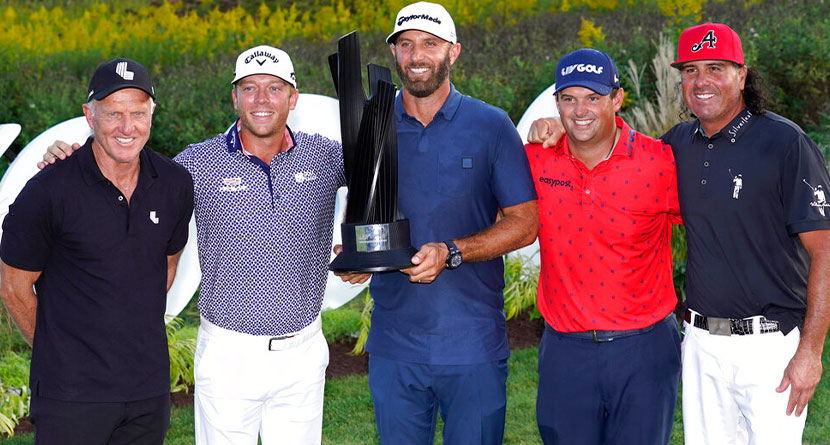 LIV Golf’s latest bid to get world ranking points is by aligning itself with a little-known tour that offers $75,000 purses and has not held a tournament since early in the COVID-19 pandemic.

The MENA Tour — Middle East and North Africa — announced Wednesday a strategic alliance that will result in MENA sanctioning LIV Golf Invitational events and making them part of its tour.

The MENA Tour said it would submit the 48-man field from the LIV Golf Invitational-Thailand to the OWGR this week before the 54-hole event starts on Friday. It said all LIV Golf players, such as Phil Mickelson and Dustin Johnson, have joined the MENA Tour.

“This is a very exciting day for the MENA Tour and our players,” Commissioner David Spencer said in a news release on the circuit’s website. “Through this alliance, our players will now have enhanced playing opportunities and stronger pathways. This is great news for the future of many young players on our tour.”

LIV Golf and its leader, Greg Norman, have been desperate to get world ranking points for its inaugural season of seven tournaments, which began in early June.

Norman filed an application with the Official World Golf Ranking board in early July. Even without some hurdles to overcome, it typically takes at least a year for the OWGR to approve a new tour joining its system.

Among the deficiencies are OWGR guidelines that every tournament be at least 54 holes with a 36-hole cut. LIV Golf has no cut. Guidelines also state that tournaments must average a 75-man field over the course of the season. LIV Golf has 48-man fields.

Perhaps the biggest hurdle is a requirement that a new tour comply with the guidelines for at least one year before it gets admitted.

LIV Golf sent a letter to the OWGR last month, signed by all the players, asking that world ranking points be retroactive. The letter cites the OWGR’s mission to administer and publish each week “a transparent, credible, and accurate Ranking based on the relative performances of players.”

“How can such a system possibly exclude players competing at such high levels against some of the strongest fields of the year for large purses, at such high-profile events?” the letter said.

LIV Golf members are set to be able to earn world ranking points as part of a new “strategic alliance” with the MENA Tour.

The Official World Golf Ranking board have yet to comment on the new partnership. pic.twitter.com/bdKqtUGQAL

It was not immediately clear what would happen to LIV Golf’s application with the OWGR because of its new alliance with the MENA Tour.

LIV Golf is playing in Bangkok this week and Saudi Arabia next week, which wraps up its individual events. Johnson leads the money list at just over $9.5 million in individual earnings from five events.

“We are taking this mutually beneficial action to support the game at the developmental level and because of the importance and fairness of LIV golfers qualifying for OWGR points,” said Atul Khosla, president and chief operating officer of LIV Golf. “We’re pleased to create pathways that give more opportunities for young players, while also giving fans rankings that include all the world’s best golfers.”

The MENA Tour began in 2011 and has 54-hole events, typical of developmental tours. The OWGR recognized it in 2016. The MENA Tour originally had a deal in which the top five players advanced to the Sunshine Tour in South Africa. It now is aligned with the Asian Developmental Tour, though it has yet to emerge from a pandemic-caused shutdown.

The winner from LIV Golf Invitational-Thailand gets $4 million.

The full statement read: “Official World Golf Ranking (OWGR) received a communication from the MENA Tour on October 5th, 2022, at 13:05 BST. The communication detailed significant changes to the MENA Tour’s membership structure along with an outline of the initial series of tournaments in the 2022/23 MENA Tour season.

“OWGR notes that the first two tournaments in this series appeared to be the same as the LIV Golf Invitational Series tournaments in Bangkok and Jeddah. The communication from the MENA Tour included a starting field data file for the Bangkok tournament, confirming that to be the case.

“A review of the changes to the MENA Tour is now underway by the OWGR.

“Only after the review is complete will a decision be made on awarding points to the MENA Tour’s new “Limited Field Tournaments”, defined by the MENA Tour in its Regulations as “any MENA Tour-approved tournament, which comprises of a player field of less than 80 players”.

“Regular official MENA Tour events conducted over 54 or 72 holes with a cut after 36 holes, and its Tour Championship, typically conducted