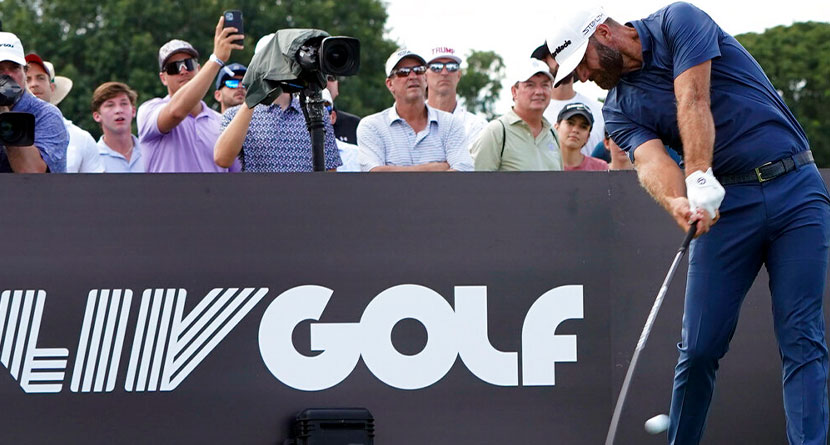 The second year of Saudi-funded LIV Golf will be going to three courses owned by former President Donald Trump as part of a 14-event schedule in 2023, according to a report from SI.com.

The report said LIV Golf announced its schedule, although the LIV website only said that a full schedule was coming soon. The rival league previously said it would open its season Feb. 24-26 at the Mexican golf resort of Mayakoba, which formerly hosted a PGA Tour stop.

LIV Golf did not immediately respond to an email seeking comment.


Meanwhile, The Daily Telegraph in the U.K. quoted European tour CEO Keith Pelley as saying he and PGA Tour Commissioner Jay Monahan have recused themselves as Official World Golf Ranking board members from any discussion on whether LIV Golf should be receiving world ranking points.

The PGA Tour confirmed Monahan was not part of the December board meeting that addressed LIV’s status. It typically takes a year before a new circuit joins the OWGR system, and LIV Golf’s league of 54-hole events with no cuts falls short of some of the OWGR guidelines.

Six weeks where competing tournaments are held within one time zone of each other. pic.twitter.com/CJJkydiedR

LIV Golf previously had announced seven sites, including four that previously were used on the PGA Tour or European tour — Mayakoba, The Gallery at Dove Mountain north of Tucson, Arizona; The Greenbrier in West Virginia; and Valderrama in Spain.

SI.com also reported Majed Al-Sorour, the managing director of LIV Golf and CEO of the Saudi Golf Federation, is leaving his post but will still be on the LIV board. Al-Sorour was seen as one of the key negotiators in signing players.

Greg Norman, the CEO and commissioner of LIV Golf, had strongly urged last year that Pelley and Monahan recuse themselves from the OWGR decision on whether the rival circuit should get ranking points.

Pelley said he, Monahan and Keith Waters — a longtime European tour executive who represents the International Federation of PGA Tours on the OWGR board — recused themselves.

That leaves only the leaders of the four majors — Augusta National Golf Club, the U.S. Golf Association, Royal & Ancient and PGA of America — along with OWGR Chairman Peter Dawson to decide on LIV.

“I have not looked at the LIV application and I’ve not given my opinions on an application I’ve not seen,” Pelley told the Telegraph. “So, as far as LIV goes, we are not involved in it and have no influence or say in what transpires.”

The developments come a week after LIV Golf announced a television partnership with The CW, in which the weekend rounds will be televised in the U.S. and the Friday round will be available on the network’s app.