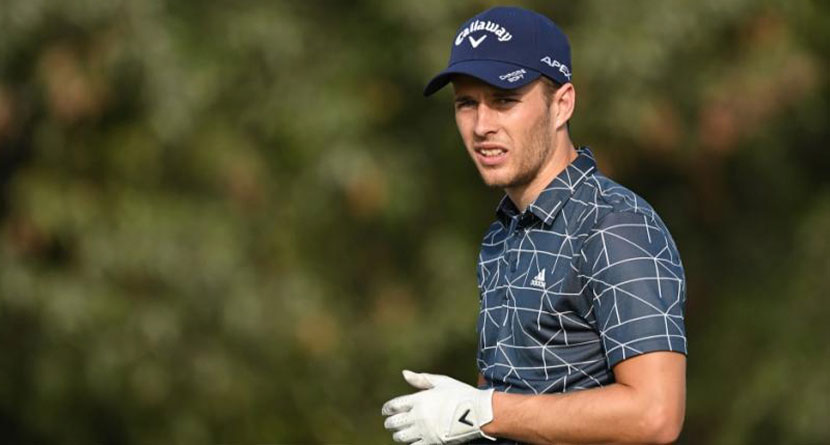 The Rules of Golf struck again on Sunday at the Qatar Masters as 63-hole leader Matthew Jordan was on the wrong side of a lost-ball clock ruling that derailed his final round.

Heading to the back nine at Doha Golf Club searching for his first DP World Tour victory, Jordan piped a drive down the par-5 10th hole looking to extend his two-shot lead. Going for the green, the Englishman pushed his fairway wood approach shot off the manicured grass and into the desert surrounds.

While the ball could be seen ricocheting off a few rocks as it entered the desert Jordan had no reason to believe the ball would be lost.

And here’s the kicker: the ball was found, but only after a three-minute search turned up empty. Under the modernized rules of golf released in 2019, the time allowance to find a lost golf ball shrunk from five minutes to three minutes under Rule 18.2a.

According to Rule 18.2a – When Ball Is Lost – A ball is lost if not found in three minutes after the player or his or her caddie begins to search for it. If a ball is found in that time but it is uncertain whether it is the player’s ball:

If the player does not identify his or her ball in that reasonable time, the ball is lost.

To Jordan’s credit, even with the lost ball penalty he was able to salvage a bogey 6 on the hole, but his round spiraled from there. Jordan made bogeys on four of his next five holes, dropping him from the lead at 8-under par into a tie for fifth place at 4-under par.

To put that run in context, the difference between the winner’s check at 7-under par won by Scotland’s Ewen Ferguson and what Jordan took home for T5 was €258,283 or more than $286,000.