Lowry Celebrated His Open In Epic Style At Dublin Pub 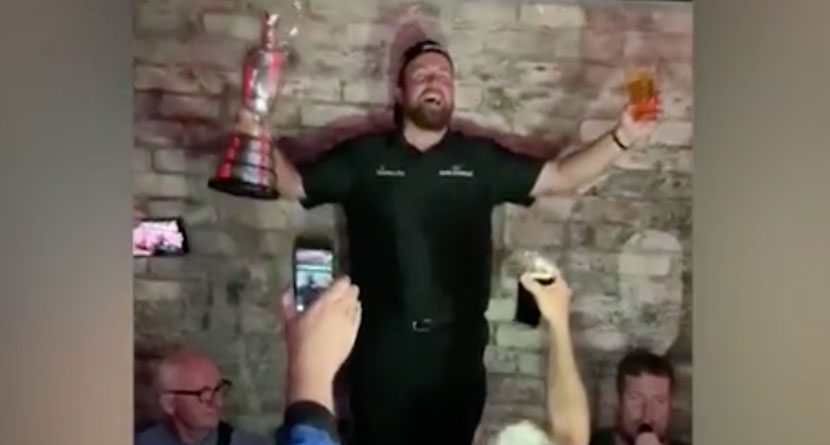 Shane Lowry’s coronation as golf’s newest major champion was years in the making and from the looks of the videos that have already surfaced from his celebration, it will be a night that will be remembered, albeit foggily, for much longer.

Entering the final round of the 148th Open Championship at Royal Portrush with a four-shot lead over playing partner Tommy Fleetwood, Lowry was wrought with worry as he harkened back to final-round collapse three years ago at Oakmont Country Club when he relinquished a four-shot lead that led to Dustin Johnson’s lone major victory.

Waking at 6:30 in the morning after a rough night’s sleep and with seven hours to kill before his tee time, Lowry called his his longtime swing coach and psychologist Neil Manchip and the pair took a walk.

“I was so scared about messing the lead up,” he said.

After an opening bogey only cost him a stroke, Lowry had recouped it by the third hole, stretched it to five by the 7th and never let it slip beneath a four-shot cushion after the 12th hole and put the final nail in the coffin with a birdie on the 15th to go up by six shots.

IN THE ZONE! @ShaneLowryGolf is six shots clear at Royal Portrush. #TheOpen pic.twitter.com/zIfKU4wkYl

After his drive found a good spot off of the 17th tee, Lowry said he was able to take a deep breath and enjoy the walk up the final few holes.

What a moment. Soak it all in, @ShaneLowryGolf. #TheOpen pic.twitter.com/IRpjCQ20a8

After more than an hour of media and other obligations, the celebration that had begun for friends and family much earlier, was set to start for Lowry.

“We’re driving down to Dublin, and we’re going to f—ing party.”

An inside look at the Open Sunday that changed Shane Lowry’s life forever: https://t.co/IP9zzJyIby pic.twitter.com/32gq20VHPA

And party they did. The Irish Independent has posted a pair of videos of Lowry surrounded by friends and family at a pub in Dublin singing and dancing alongside a local band.