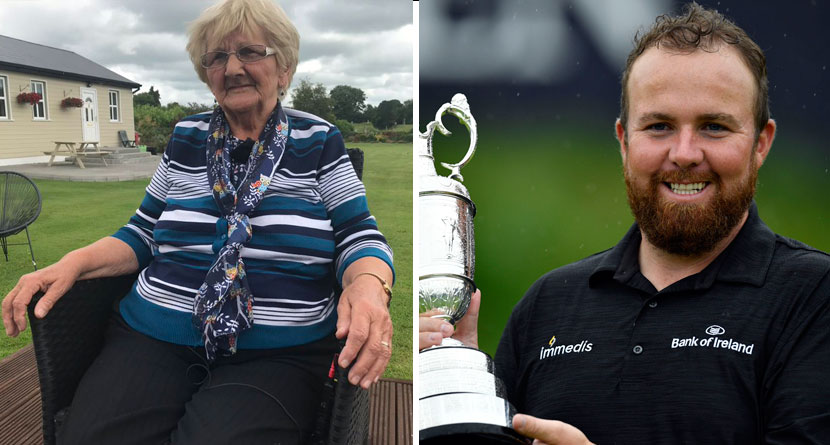 Shane Lowry’s Open Championship celebration was already the stuff of legend when videos surfaced of the Champion Golfer of the Year singing and dancing alongside the band at a local Dublin pub on Sunday night, but it was taken to the next level by an unassuming relative.

As local news and television stations gathered to get reactions from Lowry’s friends and family, his grandmother, Emily Scanlon, stole the show on Monday.

Lowry Celebrated His Open In Epic Style At Dublin Pub

In an interview with RTÉ News, Scanlon revealed that her grandson winning the Open was cause for her to have her first brandy in 10 years. In fact, she had two of them and they nearly killed her, she told the reporter.

? ‘I hadn’t drank a brandy since 2009 – drank two yesterday, it’s nearly killing me.’ Emily Scanlon has spoken of the celebrations and of how proud she is of her grandson, Shane Lowry, as the Offaly man celebrates his Open success. Golf champion Shane Lowry and his family have been celebrating his win at Royal Portrush yesterday. The 32-year-old won the tournament by six shots ahead of Tommy Fleetwood of England. Lowry becomes the fourth Irish player to lift the Claret Jug in 12 years, after Pádraig Harrington, Darren Clarke and Rory McIlory. Celebrations continued last night at his home golf club, Esker Hills, in Tullamore. Details of his homecoming are expected to be announced later today. President Michael D Higgins described Lowry’s win as both a personal and historic victory, saying he had brought pride and joy not only to sports fans around Ireland but to the Irish everywhere. #golf #portrush #shanelowry

In another interview, Scanlon recalled a young Lowry as always running around and having a good sense of humor.

“He’s a down-to-earth young lad,” she said. “I always said to him, ‘No matter where you are don’t try to be anyone but yourself.’

“I’d say to him, ‘keep your feet on the ground because in life you can go up and up but always remain who you are, what you are and where you come from.'”