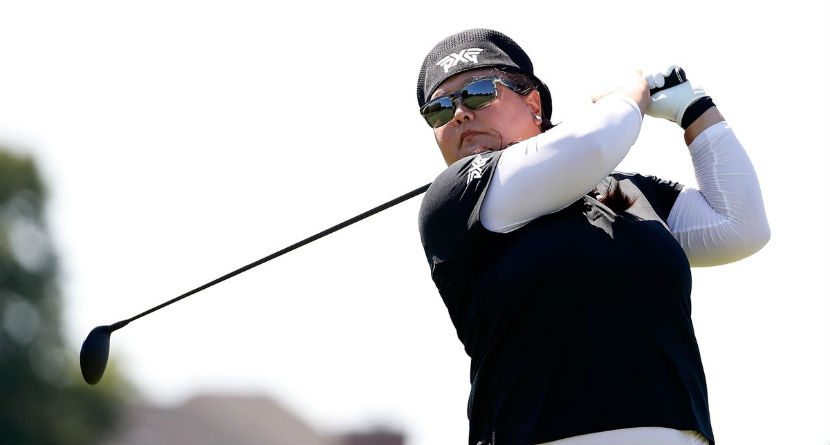 It’s been a busy weekend for women’s golf. Besides S.H. Park winning the U.S. Open over 17-year-old amateur Hye-Jin Choi, the LPGA Tour reportedly emailed its members informing them of strict changes to their dress code policy effective immediately.

On Monday, Golf.com’s Alan Shipnuck reported that players had mixed reactions to the new rules. One such player who didn’t necessarily agree with the probation of tank-tops and certain length skirts was Germany’s Sandra Gal who compared golf attire with women who play professional tennis.

“The only point I agree with is that there should not be low-cut tops, but I’ve never really seen that be an issue,” Gal said, according to Shipnuck. “I think racerbacks look great on women and I think short skirts have been around forever, especially in tennis, and I don’t think it’s hurt that sport at all, considering they play for the same prize money as the men. Our main objective is clear: play good golf. But part of being a woman, and especially a female-athlete, is looking attractive and sporty and fit, and that’s what women’s tennis does so well. Why shouldn’t we? I’ve talked to a few other players and, like me, they don’t agree with it, either.”

“I think players should look professional. Do you really need ventilation for your side-boob?”
LPGA players react: https://t.co/QX0CEBJMGd pic.twitter.com/rHsv3twJEA

One player who apparently is in favor of the rules was three-time LPGA Tour winner Christina Kim, and she was not shy about it.

“I may sound like an old fuddy-duddy, but this is our place of business and I think players should look professional. Do you really need ventilation for your side-boob? It’s not going to make your score better…There were a couple events earlier this year where we didn’t have our strongest fields and some players came from other tours or developmental tours and they’re not necessarily under contract with clothing companies and so there was some non-traditional outfits,” Kim said.

However, some players like Jane Park downplayed the email and believe that the new rules were only really aimed at a select few offenders.

“Most of us keep things pretty conservative, so this only really applies to a few people. Honestly, I don’t see why everyone is making such a big deal about it,” Park said.

Keep yourself up-to-date with the latest goings-on in the world of golf by followingweree SwingxSwing Clubhouse on social media. We share stories, stats and breaking news on Twitter, keep the fun going off the course on Instagram and share any and all golf-related topics on Facebook.